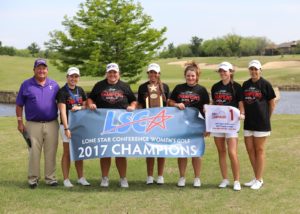 Wild shared how this season has been for her so far. “This season has been a roller coaster for sure. I played well in the fall, but struggled early in the spring. I am glad to have gotten it back into the few final tournaments of the season.” Wild certainly did get it back, she led the tournament with 27 pars and the team best of five birdies.

Traylor won and lived up to her newcomer of the year award. At the Lone Star Conference Championship tournament, she tied with Wild, also hitting five birdies and having 17 pars. “I’m very honored to be named newcomer of the year. Although I didn’t play to my potential this year, I still had some good rounds and most importantly learned a lot about my game that I need to work on going forward.”

Beatriz Pradoz and Sarah Gee both finished in the top 10 while Casey Leatherman finished the conference championship in 12th place. Leatherman walked away with 22 pars and two birdies.

Ten-time LSC coach of the year award winner Coach Jerry Doyle shared his thoughts on Wild’s performance this year and the improvements she can make going into next season. “I feel that Wild has improved every year since she has been here. When she goes home for Christmas break, it is summer in Australia so she still gets to play golf. So, she actually can get ready for the spring better than we can here in the cold weather.”

Doyle also shared his thoughts on Beatriz Pradoz leaving after this season. “She  is a consistent player and leader for this team. Her score always counts and she is always ready to compete. What we’ll need is a good recruit to take over her spot for sure.”

The TexAnns golf team’s next competition will be at the NCAA Division II West Regional tournament in Wichita Falls at Wichita Falls Country Club from May 8-10.