The Tarleton State University TexAnn golf team won their 11th Lone Star Conference Championship on April 24. Not only did the golf team break a record by having the lowest team score in a 36-hole tournament, but Sara Gee also won Player of the Year.

“I’m proud for myself, really,” Gee said. “I’ve worked hard for the last four years. To get recognized by the LSC was awesome. I really wasn’t expecting it, but I’m grateful for it.”

Gee knew she was ranked high enough for Player of the Year, but she thought another competitor was going to receive the award.

Since Gee is a graduating senior and Player of the Year, some of the advice she gave her team was to “be patient and enjoy it.” 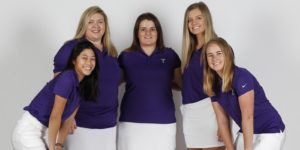 The TexAnns will compete in the West Regional Tournament at the Hillcrest Golf Club in Durango, Colorado on May 7-9. Photo courtesy of Tarleton Athletics

“I feel like college golf is different to other golf we play,” Gee said. “You are playing for a team, but you’re also playing as an individual. So, you just have to get used to the way it works – get used to the format and the pressures that come with it. If you work hard and stay patient, I feel like it will all work out.”

Gee also talked about how hard it is moving to America from England is as a collegiate athlete.

“Coming to America, let alone Texas – when we don’t know the country and not knowing Coach (Doyle) – adapting to the way of living over here takes a while,” Gee said. “Coach has been incredibly patient.”

As a freshman from Malaysia, Junie Khaw said she also had to adjust to a new country.

Sophomore Casey Leatherman set the school record for the lowest LSC Championship score and lowest individual score in a 36-hole round. She finished with an overall score of 141 and second place.

Leatherman said she is getting ready for regions by “playing one shot at a time.”

“Every time you step on a tee box, it’s going to be different,” Leatherman said. “(It’s) a different course and a different atmosphere. You’re playing for something different every time. So, I just play it one shot at a time.”

Now that the team has competed in the conference championship, they have regionals and nationals to get ready for.

“We all gel well as a team, but I think the coaches really help us a lot on the course and off the course. They make competitions so much smoother with their organization,” she said.