The 2018 softball season has been one that fans of the Tarleton State University TexAnns will remember for years to come. The team broke the record for wins in a single season, with the tally set at 46. They are ranked 15th in the nation with a record of 46-8 (23-7 in LSC play), attributable to a combination of lights-out pitching and depth that previous Tarleton teams lacked.

Leading the way for the TexAnns pitching staff is Megan Rosewell and Jordan Withrow. Rosewell, a senior from Fort Worth, has a record of 17-1 on the season and boasts an ERA of 1.67.

Withrow, a sophomore from Trenton, collected a team-high 23 wins on the season and has a 2.29 ERA for good measure. She recently became the first pitcher in Tarleton history to record 200 strikeouts in a single season, and currently sits at 6th in the nation with 220 Ks on the season.

“It’s such a great milestone, but it’s not just me,” Withrow said. “We have a great defense and a great catcher behind the plate who helps me out.”

Withrow, who has a firm lead over the rest of the conference for total strikeouts, says she doesn’t let the pressure of being so close to the top consume her.

“It’s really cool to be recognized for that, but it’s not something I’m gunning for,” Withrow said. She added she does admit to checking stats from time to time, just to see where she stands. 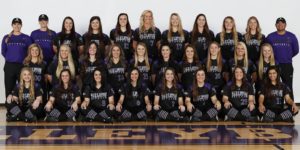 The TexAnns are led by second-year Head Coach Mark Cumpian, who has 81 wins to his name in his career.

“It’s great to have been able to do this (46 wins) but it all has to do with the players,” Cumpian said, speaking on the strength of his team.

The TexAnn bats have come alive this year, as the team currently boasts a batting average of .352.

“A lot of people don’t know this, but we have a lot of depth on this team,” Cumpian said. “A lot of these kids could be starters, but they have stepped up and performed their roles to do what’s best for the team.”

The TexAnns are seeded 4th for the Lone Star Conference Tournament this upcoming weekend and will play the Cameron Aggies Friday at 1:30 p.m.at Mayer Field in San Angelo.

TexAnn softball will graduate seven seniors at the end of this season, and is eager to make a post-season run, after falling to Texas Woman’s University last year in the regional tournament.

“I want them to be able to look back and say that playing softball for Tarleton was the best time of their life,” Cumpian said.