ALLEN, Texas– The TexAnns are now 2-0 in tournament play with those wins coming over two teams they had lost to since February.  The TexAnns beat Texas Woman’s University by a final score of 61-46.

Senior Brianna Bledsoe had her second double double of the tournament and led the team in scoring.  Bledsoe has now recorded 4 double doubles on the season. 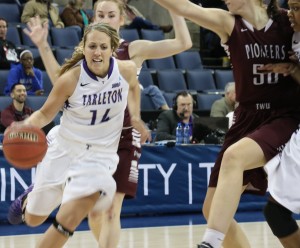 Brianna Bledsoe had her second double double of the tournament with 15 points and 11 rebounds.
Todd Coley, Texan News

The TexAnns started the half strong, taking a 33-21 lead into halftime and not letting up in the second half. The TexAnns were able to stretch their lead to as much as 25 in the game and TWU never got back in the game.

The TexAnns held TWU to just under 32 percent on the game. The TexAnns only shot 30 percent from the field but the rebounds made the difference.  The TexAnns out-rebounded TWU by a tally of 45-32 with 18 of those boards coming on the offensive end.  Senior Kiara Wright was held to only 9 points but was still able to get 10 rebounds.

Head Coach Ronnie Hearne credited a simpler defensive plan in the tournament than what they had been doing  up to this point.  Hearne said, “I think us as coaches were confusing our players a little bit. We were guarding the on ball screen about 15 different ways and now we’re only guarding it one way.”

Bledsoe said, “It’s not really focusing on that as much as the win…getting the win as a team.”

The team has really come together at the right time and the TexAnns feel as though they can make a push.  Hearne said, “Our players the last couple of weeks have decided they can make a run and be a really good team.”

The TexAnns now wait to see who they will play out of Midwestern State and West Texas A&M tomorrow in Allen in the Lone Star Conference championship game.