ALLEN, Texas— TheTexAnns worked hard Saturday afternoon to overcome an early deficit but came up short of a big comeback as they fell to Western Texas A&M by a final score of 76-61.

Less than halfway through the first half, the TexAnns were down double digits, but they chipped away at the lead for the rest of the half and were only trailing West Texas by one at half time. 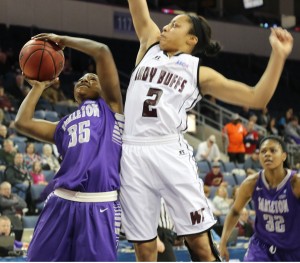 In the ten minute mark of the second half, the TexAnns had overcome the deficit and even gotten a lead of their own but it wouldn’t last. West Texas immediately answered with a 6-0 run and would trade leads with the TexAnns until a minute left where they would no longer let go of a lead. With the Lady Buffs up 3, Kiara Wright missed four consecutive free throws and West Texas was able to hold their lead and expand on it with free throws of their own.

The TexAnns still have plenty to look forward to as the national tournament starts soon. Head Coach Ronnie Hearne is still looking forward to the tournament.

I feel better about this team than any team I’ve coached as far as having the opportunity to go down there and win next weekend and keep playing in the next one,” he said.

The TexAnns now wait until Sunday to find out where they will be playing in the regional part of the national tournament.