TexAnns go out in style on Senior Night

No. 3 ranked West Texas A&M brought its 21-1 record to Wisdom Gym tonight and left 21-2.  The TexAnns put on a winning thriller 71-69 in front of their home crowd in the seniors’ last home game of their college sports careers.

West Texas A&M came into the game fired up and opened up on a 5-0 run but Tarleton would put on their own 8-2 run to get up on the Lady Buffs.  From there, it was a back and forth game that went down to the final seconds. 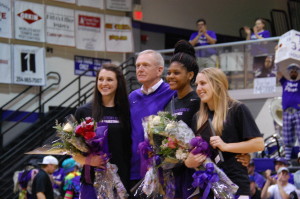 The TexAnn seniors were honored at half time during the men’s game.
Photo by Azia Branson

The last 50 seconds of the game seemed to last an eternity as the Lady Buffs tried to stay in it but the TexAnns were able to make just enough plays.  With just 3.5 seconds remaining, the Lady Buffs had the ball and a chance to win but after pushing the ball down the court, they found themselves out of time and tasting defeat for only the second time this season.

The TexAnns take to the road for their final two regular season games as they will face Eastern New Mexico University and Texas A&M University-Commerce. Tip in Portales is scheduled for 6 p.m. on Saturday.