Tarleton tennis lost at home on Thursday against No. 8 St. Mary’s Rattlers. The TexAnns fought until the end but were unable to defeat the current No. 1 team in the South Central Region. 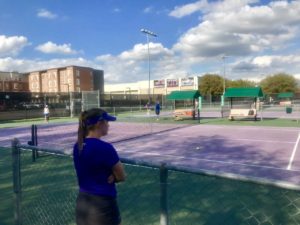 Although Tarleton has been doing well in the double matches, the Rattlers started off by winning all three of them.

“We put up a good fight during the double matches but we lost our momentum,” Fillingame said.

Freshman Neetika Sud was able to seize the win on a difficult match and received her ninth singles victory of the season. Sud fought in the first set to earn a 7-5 win and claimed her victory in the second set with a 6-1 win. She is currently leading the team in single victories.

“Neetika is a great player. She is competitive and consistent,” freshman Sherine Salem commented. “Even on bad days she manages to win matches and that is very important to the team.”

TexAnns will be back at home on Tuesday at 3 p.m. for another conference match against Midwestern State University Mustangs.