An important conference match-up Saturday night led to an aggressive battle between the TexAnns and the Midwestern Mustangs. Tarleton, now 13-5 in conference, fell short for their second straight game 63-71. 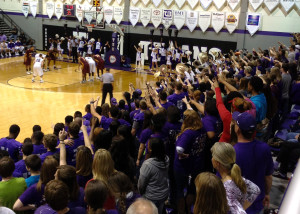 The TexAnns started the first half strong, falling behind the Mustangs only once, three minutes into the game 6-7. Tarleton opened the gap from then, leading the rest of the half by up to 13 points with four minutes left and up 32-19 on the Mustangs. The end of the first half brought a lot of yelling on the court and in the stands due to the referees’ extra foul-calling. The Mustangs tried to close the gap but the half ended in favor of the TexAnns, 32-24.

The second half was not as much in favor for the TexAnns, being out-scored by the Mustangs 31-47. The TexAnns held their lead from the first half for over 11 minutes but with 8:09 left in the game the lead changed in favor for the Mustangs for the last time making it 46-49. The TexAnns continued to fight hard but aggression got the best of them when three key players, Erin Sims, Cheyenne Berry and Brianna Bledsoe, were fouled out in the last 10 minutes of play.
Peyton Adamson led the battle for the TexAnns with 21 points and even sidelined due to foul trouble. Kiara Wright and Cheyenne Berry scored double digits on the night. Despite three double digit scorers, the lead fell to the Mustangs 63-71.

The TexAnns return to play for the last home game of the season on Wednesday at 6 p.m. hosting Eastern New Mexico.