The Tarleton TexAnn volleyball team had a devastating loss against Texas Woman’s University.  Friday’s loss leaves Tarleton at a 4-3 record for the 2013 Lone Star Conference and in third place behind the TWU Pioneers.

The TexAnns fought hard in five matches against the Pioneers.  Two of the five games were decided with extra points with the TexAnns dictating both games.  However, the TexAnns could not push their momentum from game three to games four and five.

In the first match, junior Lacy Hodges made a service ace creating an early lead of 8-6.  The TexAnns continued to build on their lead with an 11-7 run to make the score 19-13.  However, the Pioneers were not giving up just yet.  The Pioneers fought back against the TexAnns with a 9-3 run, allowing them to tie up the game 22-22. Junior, Kaitlyn White killed the ball for point 23, then turned around and blocked the ball with Katie Covell for point 24.  The game ended with an error from TWU.

The Pioneers opened up the second match with a 1-5 lead, but after making an error allowed the TexAnns to make a 4-0 run to tie up the game 5-5.  The TexAnns continued to lead the game, but after a 15-12 run the Pioneers were slowly creeping their way up to win the game.  The Pioneers eventually tied the set at 22-22. Tarleton stayed ahead until the game reached 26-25 where setter, Danielle Barker, made two ball handling errors back-to-back.  The game ended at 26-28, with both Tarleton and Texas Woman’s having a win under their belt for game three. 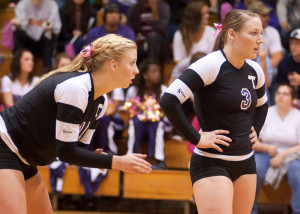 The TexAnns and Pioneers continued to fight hard, and made the game go over eight points to determine a winner.  Tarleton finally ended the game after a back-to-back kill, one from Covell and one from Jazmine Green. The final score was 29-27.

In game five, TWU took the lead in game five 5-3. TexAnns senior, Stacie Murrah, got a back-to-back kill to tie the game.  Unfortunately, the kills were not enough to upset the Pioneers. They came back and dominated the last half of the set.  The game ended at 9-15 with TWU winning the match.

Green led the team Friday with 17 kills.  Murrah followed behind with 15 kills, and Covell had 13 kills.  The team had a total of 63 kills out of 191 total attacks, giving the team a .157 hitting percentage.

Barker led the team with 55 assists and had six total digs. The team leader for digs was Emily Klein with a total of 18.  Following Klein were Covell and Lacy Hodges, who both had 11 digs.

The Tarleton TexAnns will be playing against the Texas A&M-Commerce team at 2 P.M. Saturday at Wisdom Gym for the Lone Star Conference match-up.