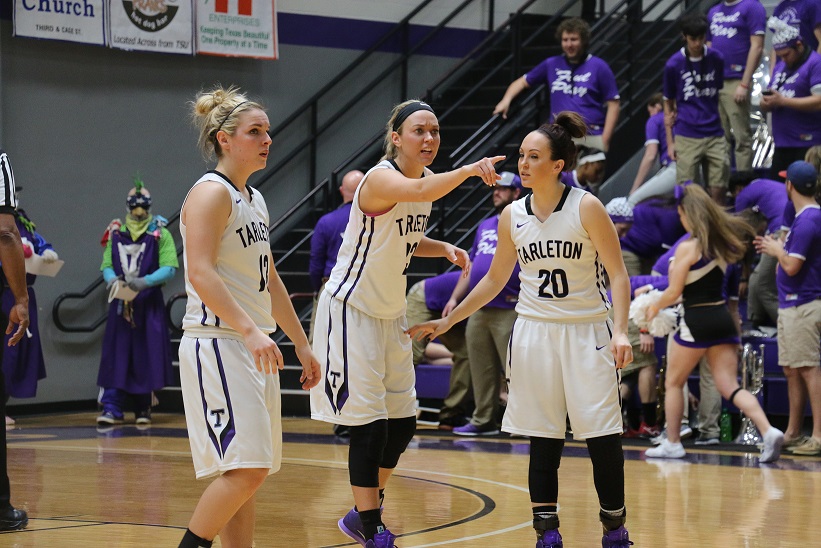 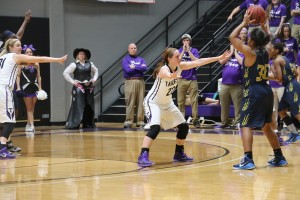 TSU lost the last meeting between the two, 84-77, on Jan. 31 in Commerce after holding an 11-point halftime lead. The TexAnns shot 36.6-percent in that contest and trailed by as many as 14 points in the second half. Saturday’s meeting was a polar opposite.

The TexAnns took a 55-19 lead into the half, after shooting 58.3-percent from the field. Tarleton State finished the route shooting 31-63 from the field for a 49.2-percent clip, including 12-26 from behind the arc. The TexAnns scored 34 points off of turnovers, and never trailed in the contest. They outrebounded the Lions, 40-28, and also forced 21 turnovers.

The victory slots TSU behind West Texas A&M, Midwestern State and Cameron, and just ahead of Texas Woman’s and Texas A&M – Commerce. TSU will play the No. 5 seed Texas Woman’s in the opening round of the conference tournament on Thursday, March 5 at 6:00 p.m. at the Allen Event Center.

Seniors Kathy Thomas and Karli Moore checked-out for their final time at Wisdom Gym to a standing ovation late in the second half. Thomas improved on her 8-point performance from the first meeting by scoring a game-high 23 points. Meagan O’Dell and Raven McGrath each scored 11 points, and Bailey Wipff had 10. All fifteen TexAnns scored in the route. 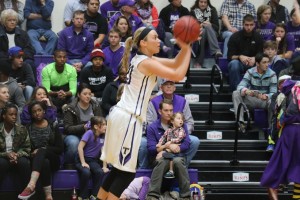 Wipff got the TexAnns on the board first, making the most of a textbook Thomas bounce pass in the lane. Back-to-back buckets from Thomas and McGrath combined with a sloppy start for the Lions to give the TexAnns an early 9-2 lead.

Thomas’ triple at the 15:27 mark pushed her over the 650 career-point plateau.

The scorching start for the TexAnns continued with five straight points from O’Dell. The TexAnn lead ballooned to 19 points, 23-4, with just over twelve minutes to play in the opening half. TSU capitalized on a three-minute TAMUC scoring drought by going on an 11-0 run.

The Lion drought continued for three and a half more minutes. Gabby Scott hit a free throw and ended the TexAnn 17-0 run, but not before they were able to build a 25-point lead. Tarleton State led 29-4 prior to the Scott freebie. 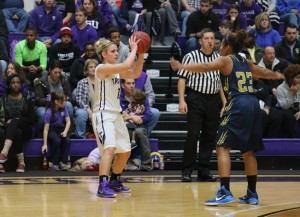 McGrath running the TexAnn offense from the top of the key. Photo by Travis M. Smith

To say that Tarleton State dominated the first half would be an understatement. The TexAnns shot 59.3-percent from the field, made nine three pointers, never trailed, and led by as many as 37 points. Thomas’ 16 points were a game high, and were a huge part of 55-19 halftime lead. O’Dell had 11 points in eight minutes, while Wipff and McGrath each had seven.

Any thought of the TexAnns letting up in the second half was quickly dismissed. TSU opened on a 10-4 run, and extended its lead to 40 points with 16 minutes and change to play. Tarleton State did eventually come back to Earth on the offensive end, but had the game well in hand by eight-minute mark – leading 78-42.

Duop’s three pointer with 20 seconds left in the game tied the school record of twelve. It is the third time the TexAnns have reached that mark, and first time since 2001.