The Tarleton TexAnns bounced back from their earlier loss this week with a quick victory against the Kingsville Javelinas on Saturday.The victory brought Tarleton to a 7-5 record in the 2013 Lone Star Conference; the TexAnns still have four games remaining in Conference.

Tarleton swept the Javelinas in just over an hour in three sets. Tarleton volleyball managed to do this with their strong and fast defense and not allowing Kingsville to make any moves on their offense.The TexAnns also used Stacie Murrah and Jazmine Green’s fast approaching offense to make quick points against Kingsville. 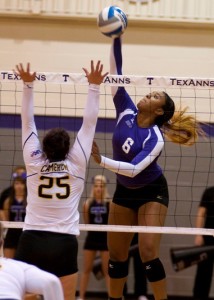 Tarleton started off the second match with a run of serves, leading 5-2, and continued to make runs against Kingsville.Unfortunately, after Tarleton made a setting error, Kingsville was able to tie up the game after an 8-11 run making the score 13-13.Both teams maintained a close score and did not make any consecutive runs for the remainder of the game.The TexAnns ended the close match after Kelsey Raglin and Murrah made back-to-back kills, ending the game at 26-24.

Kingsville opened up the final set, but Tarleton quickly sided out.The TexAnns made an early lead at 6-1 and maintained the lead until the end of the game, and did not allow the Javelinas to make any long runs during the match.

Raglin made a kill after a 7-9 run, making the score 13-10.Tarleton continued with kills from Murrah.After a 9-8 run, Murrah made another kill down line making the score 22-18.Tarleton ended the game with Kingsville getting into the net, and the end score for the final game was 25-20.

Murrah led the team with 17 kills and Green followed behind her with 12 kills.The team had a total of 54 kills out of 124 total attacks giving the team a .282 hitting percentage against Kingsville.

Danielle Barker had a total of 48 assists for all three game.

Emily Klein had 14 digs as well as three assists for the match.Raglin followed behind her with 11 digs, and Katie Covell had 10 digs.The team had a total of 57 digs.

The TexAnns will travel to Portales, New Mexico to play against Eastern New Mexico at 7 pm for their next game.