The Tarleton State University TexAnns took the field Tuesday for a home doubleheader against the Texas A&M International Dustdevils, winning the first game 2-0, and the second game 4-0.

The TexAnns are currently ranked No. 18 for the National Fastpitch Coaches Association. 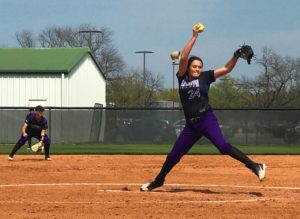 It was a day of minimal offense, in large part due to the weather in Stephenville. Wind gusts of 25-30 mph blew straight toward home plate, making the day difficult for batters.

“Our batters had to adjust, which they did a good job of,” pitcher Jordan Withrow said. “As a pitcher, it (the wind) helped me out a lot because I knew that whatever I threw and they hit wasn’t going to go very far.”

Pitcher Jordan Withrow gave up one hit early and shut down the Dustdevils for the rest of the game, adding eight strikeouts for good measure. 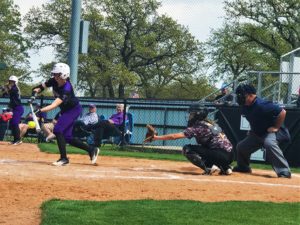 #9 senior outfielder Kaitlyn Thomas setting up for a bunt during Tuesday’s doubleheader against the Texas A&M International Dustdevils. Photo by Lorynne Benavides

On defense, the TexAnns were led by junior shortstop, Elizabeth Svienty, who made a leaping catch for an out on a ball likely to go over her head. Svienty also laid out for a ball she managed to turn into an impressive double-play, slamming the door shut on any offensive plans the Dustdevils had.

“Once I realized I had the ball and was already on second, I got really excited. I knew I could make it to first.” Svienty said.

The TexAnns have a home series against the Texas Women’s University Pioneers this weekend, potentially affecting the seeding for the Lone Star Conference Tournament. The TexAnns will take the field Friday, April 6 at 7:00 p.m., and twice Saturday, April 7 at 1:00 p.m. and 3:00 p.m.