TexAnns will host the LSC Championship Tournament from Thursday to Saturday

Over the weekend, the Tarleton State University volleyball team closed out the regular season with a sweep of Eastern New Mexico University and by becoming the 2017 Lone Star Conference (LSC) Champions. The TexAnns finished the season with a record of 26-5.

The TexAnns have three LSC titles and have also qualified for the NCAA postseason over the last four seasons. 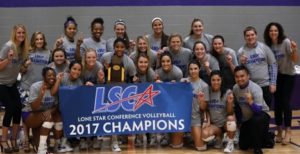 In addition to the TexAnn win, the smokestack is being lit purple tonight in honor of the volleyball team’s LSC Championship. The postseason is scheduled to begin this Thursday through Saturday as Tarleton hosts the LSC Tournament in Wisdom Gym.

The top eight team in the LSC will compete for the 2017 tournament championship and in addition to claiming the title, the tournament winner will automatically qualify for the NCAA Division II Volleyball Championship.

The teams are set to play in the annual LSC Volleyball Championship Tournament with Tarleton being the top host after their 18-2 league record win.

Beginning Thursday, the single-elimination tournament will consist of four-round matches followed by two semifinal games on Friday evening and closing out with the championship match on Saturday.

On Saturday, Nov. 18, the winners of match five and six will face off at 3 p.m. and that will determine the tournament winner.