The Tarleton State University TexAnn tennis team got off to a good start in the Lone Star Conference, defeating Texas A&M-Kingsville 5-4 on Friday.

Tarleton took the lead in doubles, with Alicia Barbaroux and Sherine Salem winning the first match 8-4, and Shelby Fillingame and Neetika Sud securing a tight victory 8-6 in the second match. 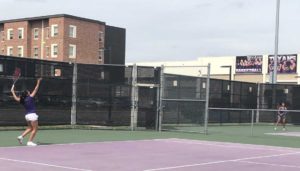 The TexAnns fell to the St. Edward’s Hilltoppers on Saturday 2-7. The TexAnns are back at home Thursday and Tuesday to fight for more wins as the season continues. Photo by Blanca Izquierdo

“It was very important for us to win the first conference game,” said sophomore tennis player Alicia Barbaroux. “We are doing really well in doubles and that’s making a huge difference for us.”

Salem gave the overall win to the TexAnns, after an exciting match in the third position of the singles matches, defeating Lauren Montalvo from A&M Kingsville 6-2, 4-6, 6-4. Barbaroux and Sud also contributed to the victory by winning their single games—Barbaroux with a 6-2, 6-4 win and Sud with a 7-5, 6-1 victory for Tarleton.

“I am happy for Sherine. She had a very tough opponent, but she played well. It was a very important win for the team,” Barbaroux added.

The TexAnns are 6-5 overall for the season and currently at No. 9 in the South Central Regional rankings.

“The goal is qualifying for Regionals. We need more victories so we can be ranked among the four first teams and make it to the tournament,” Barbaroux said.

The TexAnns will be back on Thursday for a regional home match against the St. Mary’s Rattlers at 3 p.m., followed by their second conference game against Midwestern State University on April 3 at 3 p.m.