Texans are dancing on to the Final Four

Evansville, IN – The No. 7 Tarleton State Texans are advancing to their first Final Four since 2005, and just the second in school history after handily defeating the No. 9 Trojans of the University of Mount Olive (N.C.) 77-59 at the Ford Center in Evansville. They are now 2-2 all-time in the Elite Eight and have never advanced to the championship game.

The (31-3) Texans came out of the gates sluggish on both sides of the ball and found themselves in a quick 19-9 hole.

“I thought our guys came out and were a little bit shell shocked in the first five minutes,” Texan Head Coach Lonn Reisman said. “”You have to be careful with that in these Elite Eight games. We got settled and started playing Tarleton basketball and really got it going on the defensive end. We are very proud of these young men for performing on such a big stage.”

Tarleton State did not just figure it out on the defensive end, it put together one of the most impressive second halves of the season. After being down 19-9 with just over ten minutes to play in the opening half, the Texans outscored the Trojans 68-40 over the final 30 minutes.

After allowing the Trojans to shoot 56-percent (13-23) from the field in the opening half, the pressure Texan defense held them to 7-29 in the second half for a 24.1-percent clip. 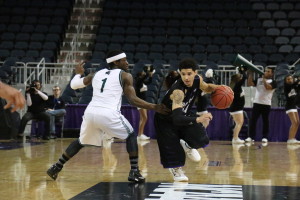 Bench scoring and free throws were again the key for the Texans, as they dominated in both categories. Michael Hardge scored ten of his twelve points from the charity strip, and as a team the Texans outscored the Trojans by 12 from the line.

“You win games at the free throw line definitely,” Hardge said, “and I always to by best to get there. Free throws are free and you have to have them.”

Tarleton State’s bench outscored Mount Olive’s by 19 points, thanks to a huge game from Deshawn Riddick. Riddick’s eleven points more than doubled the Trojans’ output. The two stand-out freshman, Nosa Ebomwonyi and Riddick combined for 20 points, including 4-5 from behind the arc. When Mo Lee was called for his second personal foul early in the opening half, it was Ebomwonyi and Riddick who filled his scoring void.

“I just wanted to play within the system,” Riddick said, “and me and Mike play well together. Coming into this Elite Eight, coach told me that I’m not a freshman anymore.” 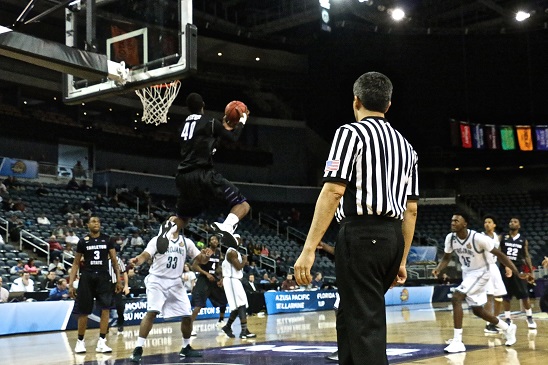 Carter starts the second half with a big dunk.
(Cameron Cook/TNS)

Tarleton State took its final lead of the game with 17:21 to play in the second half, and with the help of an 11-0 run coupled with a 3:12 UMO scoring drought, closed the game on a 38-20 run. All eight Texans who scored a point in the game contributed at least two points during the final seventeen minutes and change.

“It’s been that way for us all year, you just can’t key in on one of our players,” Reisman said. “It’s really the way we’ve been playing all year. We have been unselfish and don’t depend on one player to provide our offense.”

Seven different Texans scored at least six points and four scored in double-figures. After struggling in the first half, Lee turned in a team-high 15 points, Hardge and Davene Carter both chipped in twelve, and Ebomwonyi scored eleven after going 3-4 from behind the arc. Malcom Hamilton (9), Deshawn Riddick (9), Damion Clemons (6) and EJ Reed (3) rounded out the scoring. As a team the Texans finished the game shooting 52-percent from the field, 60-percent from behind the three-point line, and 74-percent from the free throw line. They took their largest lead (18 points) late in the second half and outrebounded the Trojans 33-27.

The Texans will play the winner of No. 25 (29-6) Indiana, Pa. and No. 14 (27-5) Azusa Pacific in the Final Four on Thursday at 6:00 p.m. at the Ford Center in Evansville. Both teams received at-large bids after failing to win their conferences out-right, and both have an All-American on its roster. Troy Leaf leads the Cougars (APU) in scoring with 23.5 points-per-game, and Devante Chance heads the Crimson Hawks (IUP) attack with 16.5 ppg. 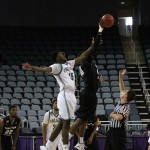 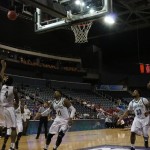 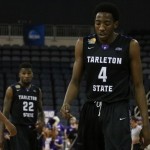 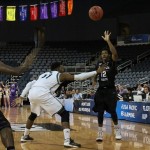 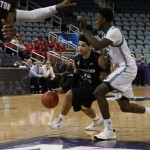