Texans blow by UC – Colorado Springs and into the Sweet 16 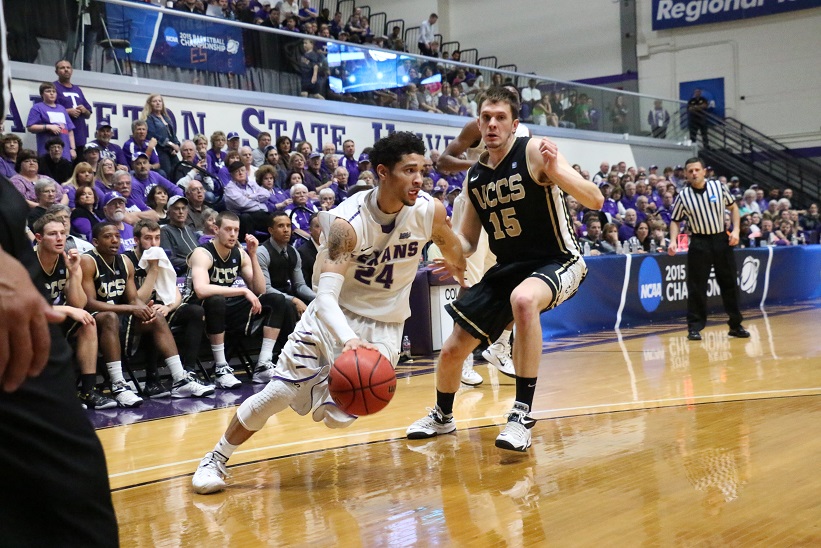 Junior guard, Michael Hardge blows by a Mt. Lion defender for two of his career-high 20 points. Photo by Cameron Cook

STEPHENVILLE – Tarleton State advanced to the Sweet 16 for the first time since 2007-08 after defeating the Mountain Lions of the University of Colorado – Colorado Springs 84-62 on Sunday night in Wisdom Gym. The sixty-two points were a season-low for the Mountain Lions, who entered the game as the No. 1 scoring offense in the region and No. 10 in the nation.

The win also notched number 29 on the season for the Texans, tying the school record for wins in a season set in 2002-03. 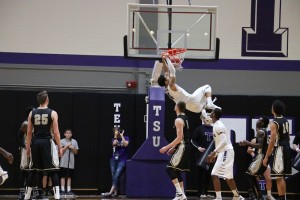 In front of a capacity crowd, the Texans put together one of their most complete performances of the season. Mo Leeand Michael Hardge led the way in the scoring column and freshman Nosa Ebomwonyi held Derrick White in check for most of the game. One night removed from scoring 50 points, White did not score a single point for the nearly first fourteen minutes of the game and finished with 19 points on 0-5 shooting from behind the arc.

“We have a target on our back every game,” Hardge said, “they came out and they gave us their best effort. We just wanted to make them uncomfortable defensively and I think we did that.”

The Texans took over early in the first half and used a 22-2 run to propel themselves to a more-than-comfortable lead. After White scored his first bucket of the game at the 6:14 mark of the opening half to end the scoring run, Lee responded with back-to-back contested threes. The second was his fifth of the half and was shot from somewhere near downtown Granbury. The run extended the Texans lead to 33-12 over a Mountain Lion team that scored 90 points less than twenty-four hours prior.

The starting-five for the Texans fell 1-point short of outscoring the entire St. Mary’s team last night, but made up for it on Sunday. They outscored every member of the Mountain Lions roster 64-62. Lee, who received IV treatments before the game and at halftime, went 6-7 from behind the arc and poured in a game-high 24 points. 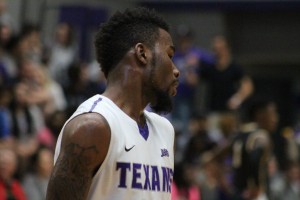 “People didn’t realize that Mo was sick tonight,” Reisman said, “we gave him a couple of IV’s, and I hate to use the word, but he had a really gutty performance tonight. He had a sick stomach all day, I just thought that he came to play. Our trainers did a tremendous job and our doctors did a tremendous job of getting him ready to play tonight. I thought he showed his competitiveness on a night when he really did not feel good at all.”

Hardge found his stroke late in the second half, counting for 12 of 16 Texan points during one stretch. His career-high 20 points were followed by 13 points from Malcolm Hamilton, who also played a major role in containing White. EJ Reed (9), Davene Carter (8), Damion Clemons (4), Ebomwonyi (3) and Deshawn Riddck (3) rounded out the Texan attack. Carter also collected eight rebounds, including a game-high four on the offensive glass. Hardge and Riddick combined for nine of the sixteen Texan assist.

Carter won the opening tip but Alex Welsh grabbed the loose ball and scored a quick bucket for the Mountain Lions. Ebomwonyi hit a three for the Texans on their first possession, and Carter continued his scoring tear on their second possession to knot the game at 5-5 early.

Lee’s second three was a carbon copy of his first, finding nothing but the bottom of the net with TreShawn Wilford in his face. Reed powered his way to the rim and converted the game’s first and-one opportunity to give the Texans a 16-8 lead with just over 15 minutes to play.

Tarleton State continued to score, and put together a 17-2 run over six minutes and change to build a 22-10 lead. The physicality and basketball IQ of the Texans was displayed perfectly by Reed after a media timeout on the floor. Reed baited the Mountain Lion ball handler into the low post and took a textbook charge. He then drove the lane on the offensive end, took a hard foul and drained both free throws. 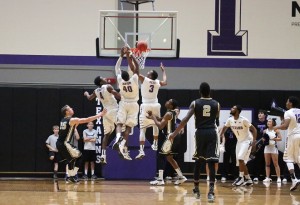 The Texans outrebounded UCCS by ten because of hustle like this. Five white jerseys to three navy. Photo by Cameron Cook

The Texan scoring run continued, extending to 22-2 before coming to an end. White ended the run and his scoring absence with 6:14 remaining in the half. Lee made his fourth and fifth contested threes and the Texans had a 33-12 lead with under five minutes to play in the half.

The game fell into a bit of a lull before a Clemons bucket in the paint, and a Reed and-one after a nifty Lee assist. The Mountain Lions turned the ball over for the eighth time, and Hamilton almost brought Wisdom Gym to the ground with a monster alley-oop jam.

Tarleton State controlled every aspect of the opening half. They outshot, out rebounded, outscored and overpowered the Mountain Lions. Lee led all scorers at the break with 15 points, on 5-5 shooting from downtown.

Any thoughts of the Texans coming out in flat in the second half were quickly dismissed after they put together a quick 8-2 run. Another high-flying oop, this time with Clemons as the recipient, gave the Texans a 19-point lead with 15:05 left to play.

Lee’s sixth three of the game gave him 20 points on the night, and all but punched Tarleton State’s ticket to the Sweet 16 on Tuesday night. The Texans took a 21-point lead into the final ten minutes of the round of 32.

Hardge scored eight of twelve for the Texans to keep the Texan lead at twenty points going under three minutes to play. He joined the 20-point club a few possessions later with a three late in the shot clock, extending the Texan lead to a game-high 24 points. The 20 points matched his career-high set on Jan. 10, 2015 against Texas A&M – Kingsville. Tarleton State ran out the clock and kept their season alive, winning 84-62 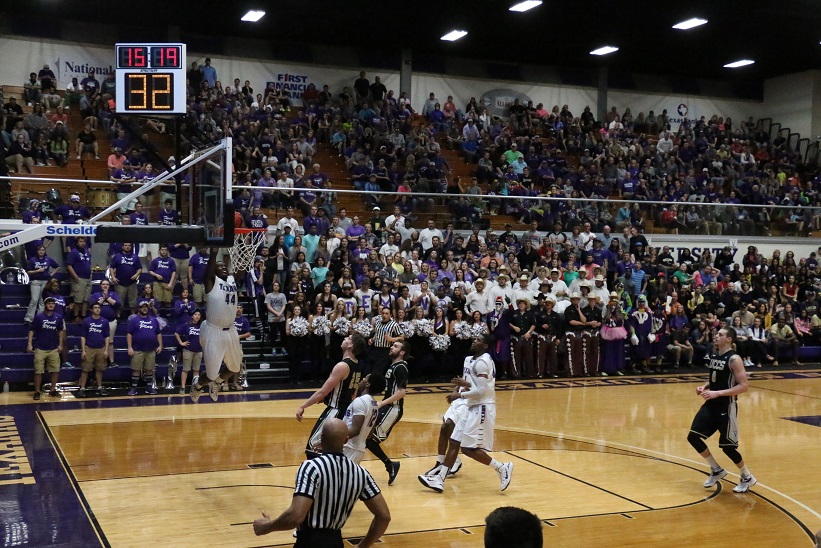 Clemons throwing down an impressive alley-oop in front of a capacity Wisdom Gym crowd. Photo by Cameron Cook 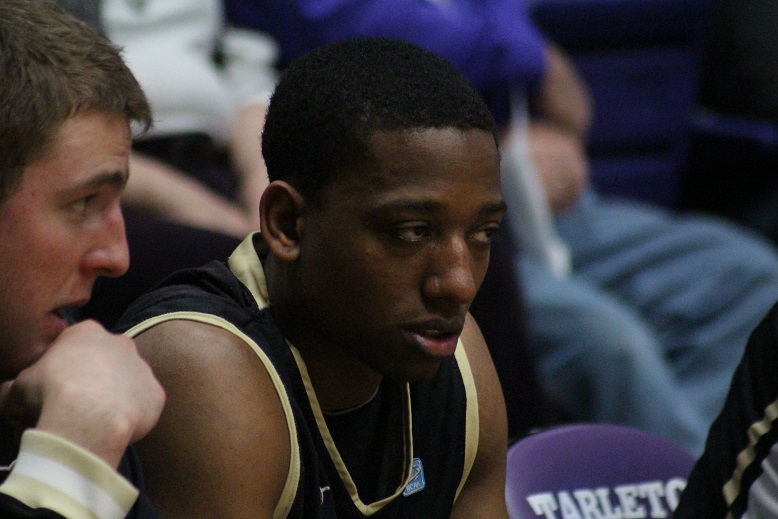 The Texan defense kept the pressure on the Mt. Lions all night and exhausted them in the process. Photo by Justin Pack 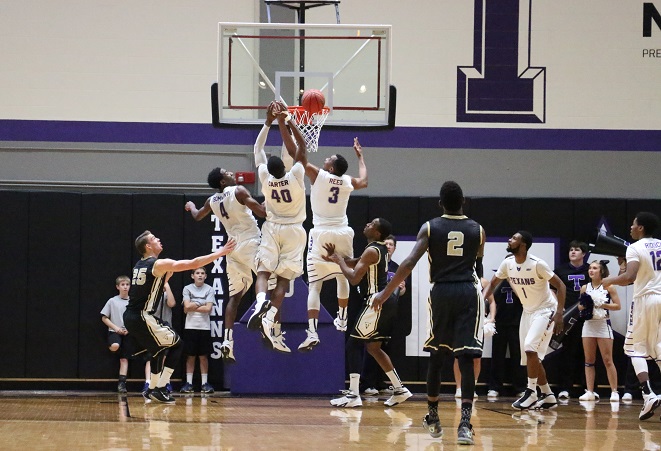 The Texans outrebounded UCCS by ten because of hustle like this. Five white jerseys to three navy. Photo by Cameron Cook 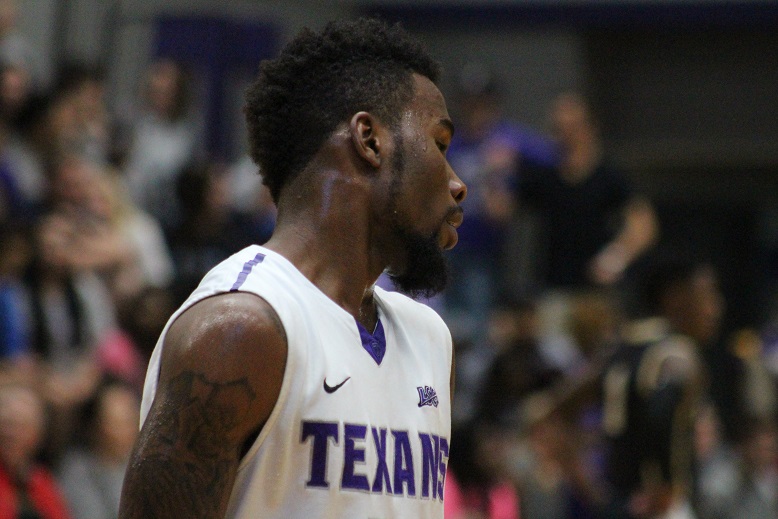 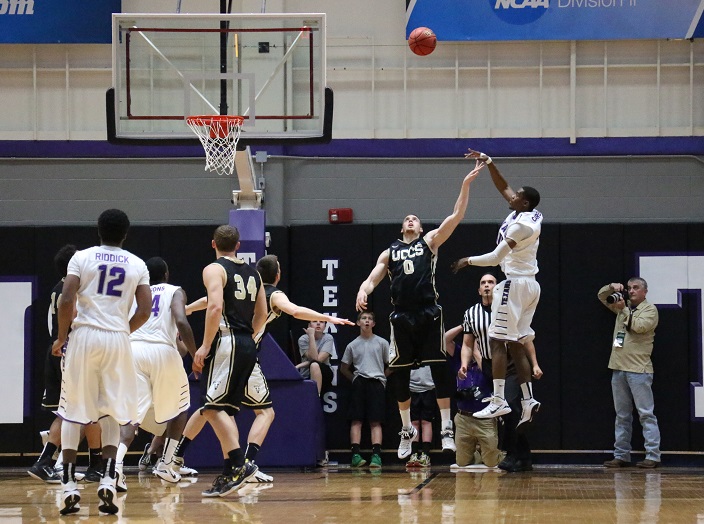 Carter continues to be a force in the low-post. He had 8 points and 8 rebounds on Sunday. Photo by Cameron Cook 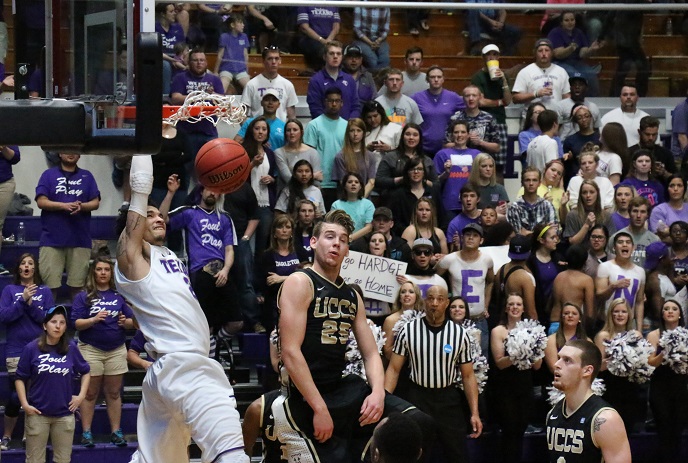