HOUSTON — Texans coach Gary Kubiak was hospitalized in stable condition Monday, one day after collapsing on the field at halftime of Houston’s 27-24 loss to Indianapolis.

The reeling Texans, losers of six straight, were left to worry about their coach and wonder when he’ll return to the team. The Texans have not disclosed what’s wrong with the 52-year-old Kubiak, saying only that he did not have a heart attack. 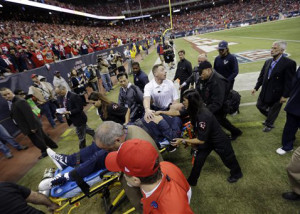 Houston Texans head coach Gary Kubiak is taken off the field on a stretcher during the second quarter of an NFL football game against the Indianapolis Colts, Sunday, Nov. 3, 2013, in Houston.
(AP Photo/David J. Phillip)

“There was a lot of unknown,” said defensive coordinator Wade Phillips, who coached the team after halftime. “Everything was unknown as to what was going on and what happened to Kube.”

Kubiak hunched over and dropped to his knees at the 24-yard line and he was immediately surrounded by medical personnel. He was taken off the field on a stretcher and put in an ambulance.

The Texans said Kubiak was conscious and with his family as he was taken to the hospital.

“He had an episode; he was light-headed and dizzy,” Houston general manager Rick Smith told NBC following the game. “He was evaluated by a number of specialists … he is awake and coherent. We have to assess … obviously, there’s a lot of info. Hopefully, Gary will be back with us tomorrow (Monday).”

Denny Angelle, a spokesman for Houston Methodist Hospital, referred all questions about Kubiak to the Texans.

Kubiak has been head coach in Houston since 2006, a former NFL quarterback who calls the team’s plays. The Texans were a trendy Super Bowl pick in the offseason and started 2-0, but the season had turned into a disaster even before Sunday night.

“It’s on your mind when you’re out there playing,” receiver Andre Johnson said. “But you try to focus on the game and just go out and do your job.”

Up 21-3 when Kubiak collapsed, the Texans struggled after halftime as the Colts rallied for a win. Veteran safety Ed Reed didn’t want to blame the loss on what happened to Kubiak, who has had no known public health problems.

“I thought we dealt with it well,” Reed said. “We’ve just got to finish.”

Kubiak’s collapse came a day after Denver Broncos coach John Fox was hospitalized in North Carolina as he awaits aortic valve replacement surgery. The 58-year-old Fox will have surgery and miss several weeks while recuperating.

Fox had been told earlier about his heart condition and was hoping to put off the operation until February. On Saturday, Fox became dizzy playing golf near his offseason home in Charlotte and was taken to a hospital, where tests revealed he couldn’t wait any longer.

Kubiak made his mark as Denver’s offensive coordinator under Mike Shanahan, winning two Super Bowls. An eighth-round pick out of Texas A&M, he spent nine years as John Elway’s backup. He finished his career 4-1 as a starter, all in emergency relief of Elway.

Kubiak has long been known as a top offensive coach, mentoring quarterbacks in Denver and now Matt Schaub — and Case Keenum — in Houston.

Kubiak was hired in 2006, along with general manager Rick Smith, after the Texans finished a franchise-worst 2-14. Smith spent 10 years with Kubiak while the coach was offensive coordinator of the Broncos.

The pair has helped transform the Texans, which began play in 2002, from league laughingstock to contender. The team went 6-10 in their first year and 8-8 in each of the next two seasons. Expectations were high in 2010 after Houston finished at 9-7 for its first winning record in 2009. But the Texans instead fell to 6-10, which led to many fans calling for Kubiak’s firing.

His original contract was due to expire after the 2010 season, but owner Bob McNair has stepped up to keep Kubiak and defend him several times amid the bumps. Last year, the Texans announced contract extensions for both Smith and Kubiak, rewarding them for taking the team to the playoffs last year for the first time. Kubiak’s three-year agreement has him under contract through 2014.

McNair said at the time he offered Kubiak a four-year deal, but the coach preferred to make it for three.