Texans cruise in opening round of the NCAA South Central Regional 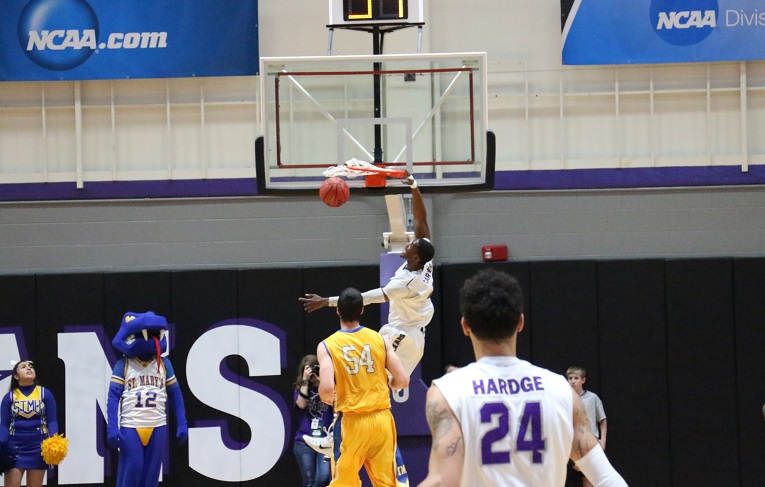 Carter led all scorers with 21 points. Photo by Cameron Cook

STEPHENVILLE – The No. 1 seeded Tarleton State Texans left no doubt on Saturday night in Wisdom Gym, throttling the Rattlers of St. Mary’s 71-52. The Texans opened the second half 10-10 from the field, quickly built a 20-point lead and never looked back. 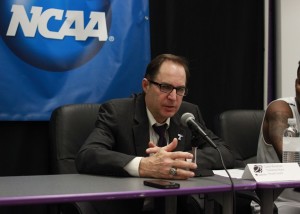 Reisman addressing the media after the game. Photo by Cameron Cook

“It was a very tough ballgame, and we have a lot of respect for St. Mary’s,” Texan head coach Lonn Reisman said. “I thought our guys really came out tonight, played hard and really executed our game plan defensively. Everyone loves playing at home this time of year, but it’s very stressful. The expectations are so high when you have a full gym, and the expectation is to win. It’s a great feeling for our staff and our players to get that first win.”

Tarleton State won the previous meeting this season against St. Mary’s 75-64 in Stephenville, where they outscored the Rattlers in the paint 36-26. Saturday’s game was almost a carbon copy, as the Texans outscored them again in the paint, 40-22.

The Texan starting five fell one-point short of outscoring the entire St. Mary’s team. The 51 points were paced by Davene Carter’s game-high 21 points. Second team All-Region guard Mo Lee scored 15, Michael Hardge and Malcolm Hamilton each had 12, Damion Clemmons grinded his way to eight and EJ Reed pitched in 3 points of his own.

The Texans entered the game as the No. 1 scoring defense in the eight-team regional and on the flip side, the Rattlers 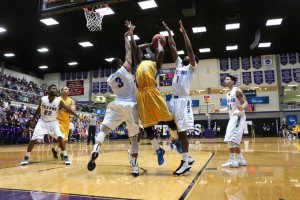 The Texan defense was ferocious, and they never trailed by more than one-point. Photo by Cameron Cook

entered as the worst scoring offense. Those numbers proved accurate, as St. Mary’s was held well below its scoring average of 70.6 points per game and below the 60.3 points per game being surrendered by the Texans. The Rattlers shot 37.0-percent from the field compared to the Texans 55.1-percent, and had only two fast break points.

Tarleton State will play the winner of (4) University of Colorado – Colorado Springs and (5) Colorado Mines at 7:30 p.m. on Sunday night at Wisdom Gym in the semi-final round of the South Central Regional.

Tarleton controlled the opening tip, and both teams opened with a pair of turnovers. The game was scoreless for the opening two minutes, but Lee’s twelve foot jumper got the Texans on the board first. Tarleton put together a quick 8-0 run, highlighted by a Carter windmill dunk after a Rattler turnover.

The Rattlers ended the run, making two free throws after a media timeout. An Ebomwonyi close-out block on defense led to a Carter tip-in and extended the Texan lead to 15-7 with under ten minutes to play in the opening half. 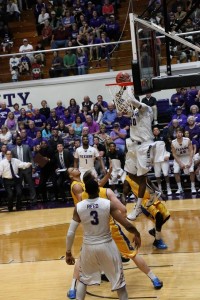 One of Carter’s alley-oop dunks. Photo by Cameron Cook

Carter was the first player for either team into double figures, after Lee found him for an alley-oop slam to keep the Texan lead at five. Through the first thirteen minutes of play, the Texans were still shooting above 50-percent from the field.

Kriston Minor hit a corner three for the Rattlers to pull them to within three with five minutes to play in the half. Carter continued to shine in the opening half, and scored three straight Texan points to build a six-point lead with under three to play. His thirteen points were already more than any Texan scored in the previous meeting against St. Mary’s.

Another dunk by Carter extended Tarleton’s lead to nine points, the largest of the game, with just over a minute to play. Clemons stole an errant Rattler pass, but the Texans failed to do anything with the opportunity. Tarleton State took a 30-21 lead into the locker room.

The Texan starting-five outscored the entire Rattler team in the first half, 26-21, and were paced by Carter’s game-high 15 points and nine more points from Lee. Thomas led the way for the Rattler team that shot just 38.9-percent in the half. Tarleton was winning the points-in-the-paint battle, 16-8, and led for 17:41.

Carter wasted no time picking up right where he left off, and scored the first two points of the new half after a Rattler turnover. The Texan defense continued their relentless effort, and held the Rattlers scoreless for the first three minutes and change of the second half. Hardge hit the Texans second three pointer of the game, and gave them a 37-21 lead.

Tarleton State continued its dominance in the paint, and built a 20-point lead with less than 15 minutes to play in the opening round of the South Central Regional. Clemons threw down an alley-oop and then muscled his way to another two points on the next possession to give the Texans a 45-25 lead.

Reed’s three from the top of the arc continued Tarleton State’s perfect shooting for the half. Through ten minutes of play, the Texans were 10-10 from the field and outscoring the Rattlers 28-14.

After extending their lead to 23 points, the Texans defensive pressure eased and allowed the Rattlers to score 9 of 11 points. A personal foul, followed by a technical foul gave Hardge four free throws and he buried all four. Tarleton’s led extended back out to 22 points, 66-44, with 3:55 left in the quarter-final round.

Hamilton threw down a ferocious alley-oop dunk, and was called for a technical after slapping the back board on the way down. The dunk was the statement dagger in the contest and the Texans were three minutes from moving on to the round of 32. The Texans cruised to a 71-52 win. 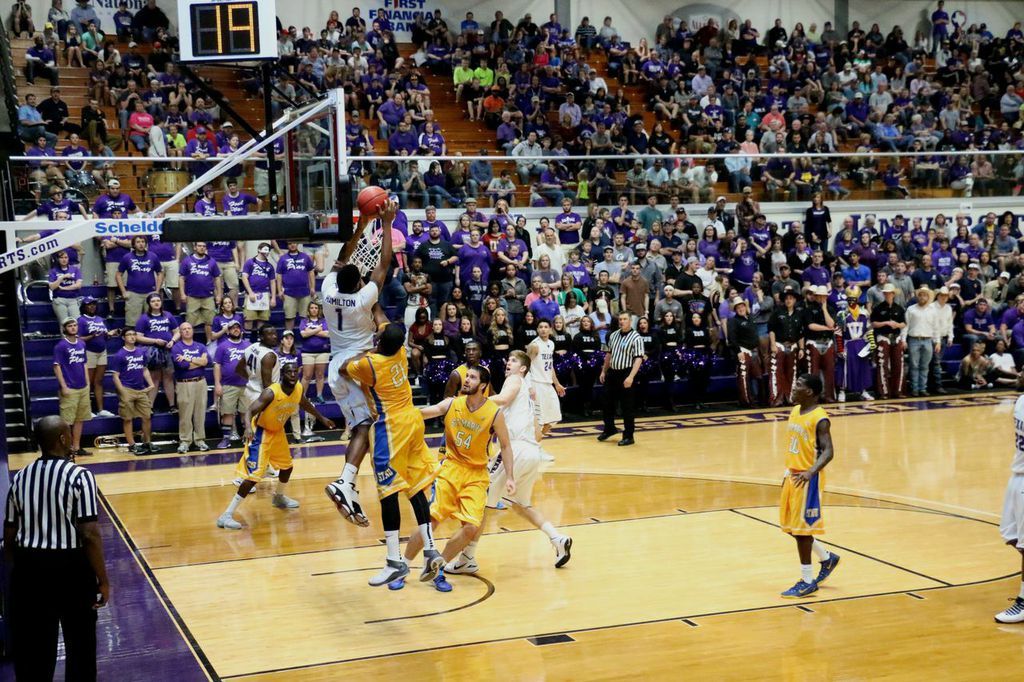 Hamilton throwing down a monster jam in the lane. Photo by Cameron Cook 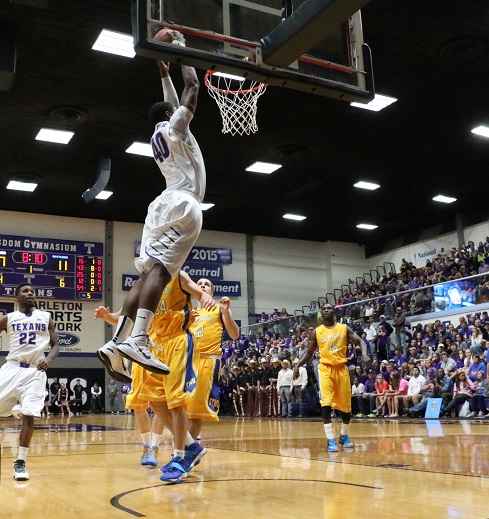 Carter will be on ESPN for the NCAA Slam Dunk and 3-Point contest on April 4. Photo by Cameron Cook 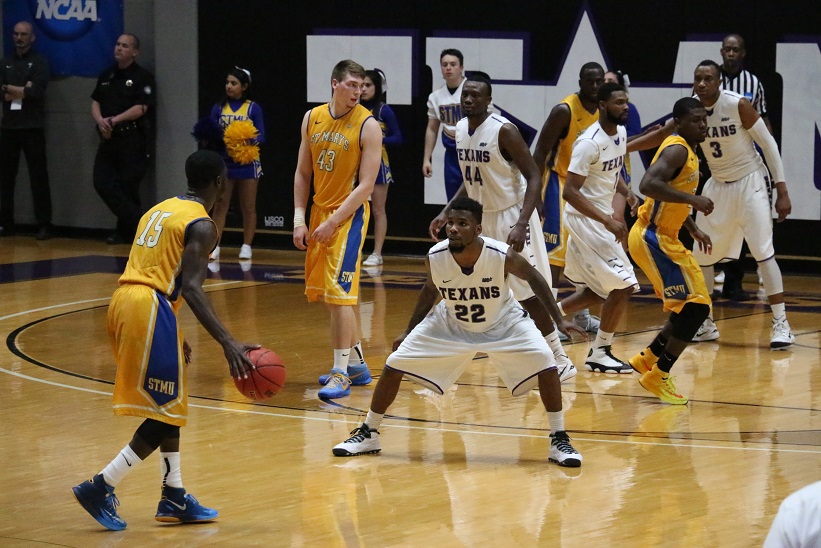 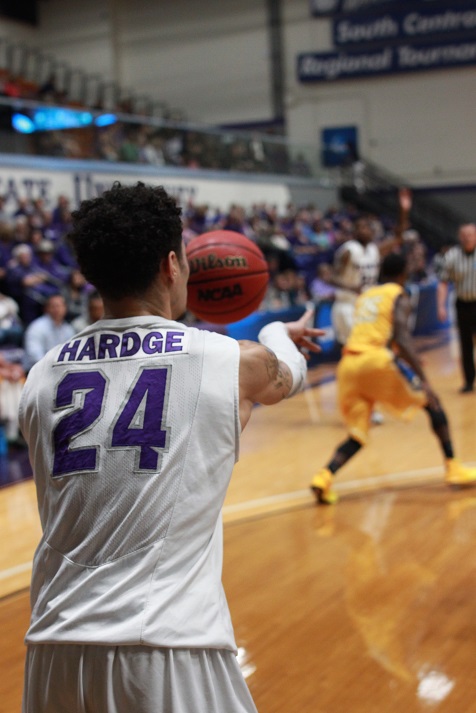 The Texans had 15 assist on 27 made baskets. Hardge led the team with four. Photo by Cameron Cook