The victory improved the Texans’ record to 17-8 through all competition and 10-7 in the Lone Star Conference. Eastern New Mexico dropped to 11-14 overall and 8-9 in the conference. 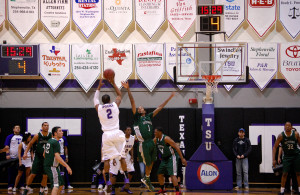 The Greyhounds came out in the first half and couldn’t miss. Tarleton trailed by eight at one point in the half. But a big run at the end of the half had the Texans up by two heading into the locker room.

The closest the Greyhounds got to catching up to the Texans in the second half was within a point early. But once again the Texans made a big 10-2 run to widen the gap once more and wouldn’t look back after that.

Chuck Guy led the Texans in scoring with 21 points. Jon Cathey-Macklin led the game in rebounds with nine, and was only a rebound and a bucket away from a double double.

Brian Word, the only senior on the team, was honored at the beginning of the game for his career accolades. Word finished with two points and two steals in the game.

With the victory, the Texans clinched the third seed in the LSC tournament March 7. They will play the sixth seed in the conference, which is still being fought for.

The Texans close out their regular season play Saturday with a game in Canyon against West Texas A&M at 7 p.m.