Big stadium, big plays and big heartbreak were the themes of Saturday’s game at AT&T Stadium between the No. 12 Tarleton Texans and the Panthers of Florida Tech. In an offensive shootout, the Panthers outlasted the Texans and returned home from their first trip to Texas with a 37-31 victory.

Collin Strahan and Bubba Tandy both turned in career days for the Texans. In just his second career start, Strahan completed 22 of 39 passes for a career high 305 yards, while Tandy had a career high 154 receiving yards on seven receptions.

After trading punts, Tarleton got the scoring started when a 4-yard Zach Henshaw run capped off a 10-play, 74-yard drive. The Panthers, not wanting to be upstaged, pieced together an 11-play, 78-yard drive, and after their own 4-yard touchdown run the game was knotted at seven. Tarleton responded on its very next offensive play from scrimmage. Strahan dropped back and found Tandy for a 77-yard touchdown, giving the Texans a 14-7 lead at the end of the first quarter.

Florida Tech scored the first two touchdowns of the second quarter when Trevor Sand found the end zone on runs of three and 51 yards. The Panthers’ seven point lead was cut into after the Texans traveled 55 yards, allowing for a 32-yard Blake Barnes field goal to bring the Texans within four.

The Texans were not done. The Tarleton defense held strong and forced the Panthers into a quick three-and-out. After the Panther punt, Strahan quickly took the Texan offense into opposing territory. Electing to forego a 38-yard field goal attempt, Strahan found Le’Nard Myers between multiple defenders as time expired in the half. The Texans went six plays in 38 seconds, which was highlighted by a 21-yard Myers touchdown reception, to take a 24-21 lead into the half. 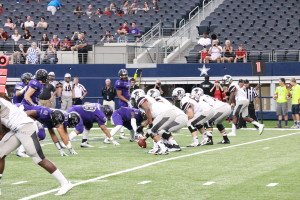 Both teams struggled to find a rhythm on offense in the third quarter. Florida Tech capitalized on the lone opportunity the Texan defense presented, when Gabe Hughes hauled in a Mark Cato pass, for a 64-yard touchdown. The extra point kick split the uprights, and the Panthers took a 28-24 lead.

Less than a minute into the fourth quarter, Brion Ashley snuck a 36-yard field goal by the right upright and put Florida Tech up by a touchdown, 31-24. After a Tarleton punt, a Panther fumble and a Dakota Hesskew recovery, the Texans had first-and-10 at the FIT 32-yard line. Strahan and company wasted no time. The Texan drive took just four plays, and after the seven-yard Strahan touchdown run, Tarleton and Florida Tech were tied for the fourth time.

Cato and the Panthers responded on their very next possession. On the 14th play of the drive, Tyler Bass took a Cato swing pass for a seven-yard FIT touchdown. The extra point kick was blocked, leaving a window open with the Panthers leading the Texans 37-31. A Texan touchdown and extra point could win the game. The ensuing Texan play from scrimmage was fumbled and recovered by FIT. Tarleton needed its defense to step up now more than ever, and they did. After being forced into a 4th-and-8, Ashley’s kick was pushed left. Tarleton’s offense took over down by six points and needed a miracle.

Strahan’s attempt to recreate his first half magic came up short, and the No. 12 Texans fell to the upstart Panthers 37-31.

This was the first meeting between the two schools, and only the second year of Florida Tech football. The Panthers compete in the self proclaimed, “mini SEC,” more formally known as the Gulf Coast Region of Division II.

The Texans return home this week for TSU Family Weekend to face the nationally ranked Midwestern State University Mustangs. The Mustangs are 2-0 on the season and are one of the favorites in the Lone Star Conference. Kickoff is set for 7:30 p.m. at Memorial Stadium. Texan Alley will open three hours prior to kickoff.