This father and son combination commenced the day of December 3, 2015 in a news conference that announced the selection of Whitten as the new head coach. 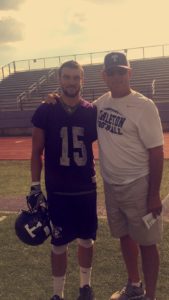 Tate and his father/coach, Todd Whitten pose together after a long day of practice.
Photo by Rebecca Hernandez, Texan News.

“I was with my buddies when the news broke and they were arguing about who they thought would be coach. I just remember sitting there knowing it was my dad,” Tate said.

“That day I found out and called Tate [and] we weren’t going to announce it for another 24-hours. So Tate had to keep that under his hat, we were both really excited,” Todd said.

Tate said his relationship with his dad is strictly business and the team is what matters. “I didn’t know what to expect. My dad treats everyone the same so I do not get any special treatment or attention because the attention is a 100 percent on the team,” Tate said.

Between work and school, the Whitten’s have had little to no time together during the football seasons until now that coach Whitten has the opportunity to on the field alongside his son.

“(I’m) a college coach. It’s hard to spend a lot of time together. We have not had time together for over the last ten years. Seeing him every day for workouts all through the summer, watching him work hard, being a good friend and teammate, it’s been a lot of fun for the both of us,” Todd said.

“I like the opportunity to work with my dad this year, being my last season. My dad(‘s) coach(ing) style is a lot different than last year. Now [with him as coach], you know the world isn’t going to end but he really builds off of what we do wrong and guides us from there,” Tate said.

“It (is) our first time to work together and I know we are both thankful. Tate (is) a really good kid and I cannot be more proud of Tate. He is set to graduate in December and what a blessing for me to have the opportunity to come for his senior season,” Todd said.