After being in nothing but close games since the Midwestern State loss, the Texans enjoyed a wide margin of victory tonight in Wisdom Gym as they beat Texas A&M Kingsville 94-58. The Texans were led by De’Andre Upchurch’s game high 21 points on the night.

The game was the first Tarleton game to be broadcast on TV and the Texans set out to impress onlookers watching in the gym and broadcast viewers. There was plenty to watch around the gym as the Texans were able to pull off dunks and alley-oops throughout the game.

Chuck Guy had a game high 14 assists to go along with his 18 points and Tashawn Mabry went 5-7 for 13 points. The first half was all Upchurch as he poured in 18 points. Upchurch was 6-6 from beyond the arc and had 4 rebounds as well.

Associate Head Coach Chris Reisman said, “De’Andre is a great shooter and if you look at his stats over the last three games, he is

really playing like an all league first teamer right now.” 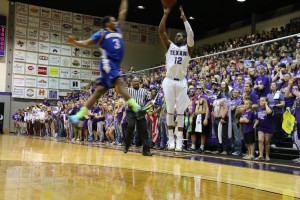 De’Andre UpChurch went 6-6 from three as he put in the game high 21 points.
Photo by Azia Branson

There are only four games remaining in the regular season before the conference tournament starts. “The biggest thing for us is, I don’t want us to get complacent,” Reisman said. “We can still get better and we want to get better right now.”

Davene Carter said the team is hoping to win out as the season winds down so they can host a region in the NCAA tournament and play in front of the Tarleton fans.

The 36 point margin of victory was the largest for Tarleton in 2014.