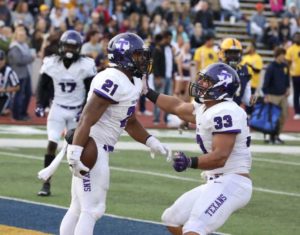 The Tarleton Texans are now ranked no. 9 in the Division II rankings.
Photo courtesy of Tarleton Athletics.

This win vaulted the Texans seven spots to number nine in the American Football Coaches Association Poll. This is the first time in nearly a decade that the Texans have been ranked in the top 10. The Texans (5-0) now sit first in the Lone Star Conference standings followed by Midwestern State (4-1) in second with A&M Commerce and West Texas A&M (Both 3-1) tied for third.

“To go on the road and play these guys is a big challenge. Hopefully we’ll be ready,” said Texan Head Coach Todd Whitten.

The Texans were more than ready for the defending national champs.

The Texan offense couldn’t be contained by the Commerce defense as they recorded nearly 500 yards of total offense, compared to the 360 yards of offense that Commerce recorded. Xavier Turner led the team for the Texan ground game with 166 yards and two touchdowns. The Texans went on to record 282 rushing yards and three touchdowns on the ground.

The Texans will continue conference play as they take on the Texas A&M Kingsville Javelina’s this Saturday at Memorial Stadium in Stephenville.