Fort Worth, TX— The first half was one that saw a suffocating defense in Fort Worth by the TCU Horned Frogs as they held the Texans to only 26 points. The game started as a defensive struggle for both teams and the first bucket wasn’t scored until over two and a half minutes had gone by. Chris Washburn hit a two point field goal to get the scoring started for TCU and the Texans weren’t able to score until just over 15 minutes left in the first half.

The Texans got it going in style, however, when TaShawn Mabry threw up a pass for Davene Carter to slam down. The play got the mostly pro Tarleton crowd into the game for the first time in the game. The Texans still weren’t able to capitalize on a momentum shift though, and they saw TCU stretch it out to 16-2 before they would score again. 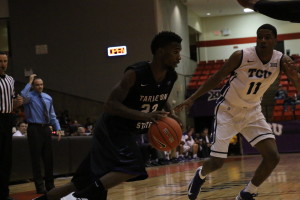 Mo Lee scored 14 points in the exhibition game against TCU in Ft. Worth on Thursday night.
Photo by Azia Branson

Halfway into the first period, TCU was already up 21-6 but the Texans would put together some impressive defense of their own for a stretch and get back into the game. During the defensive stretch, TaShawn Mabry was able to swat away a TCU bucket and Michael Hardge was able to get to the line and drain both free throws to make the score 21-8.

When TSU finally got within range and brought the score down to 21-11, TCU would go on a run of their own to distance themselves a bit from the Texans. Kyan Anderson started the scoring for the Horned Frogs and would go on a 5-0 run to put TCU up 26-11 and TCU would add another 4 to make it 30-11 before the Texans could score again. Mo Lee was able to hit a deep three for the Texans and Tarleton would go on a 7-2 run after that.

The Texans kept their defense strong to end out the first half and were able to pull within 14. Tarleton went to the locker room trailing 40-26. Their star of the first half was Mo Lee who scored eleven points for the Texans. TCU saw their guard, Kyan Anderson score 16 points on 4-6 shooting as well as going 7-7 from the charity stripe. 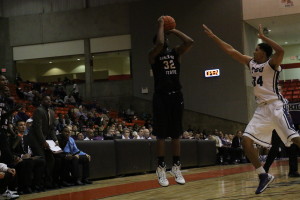 TaShawn Mabry completed a double-double in the loss to TCU with 23 points and 10 rebounds.
Photo by Azia Branson

The second half started with a three from Malcolm Hamilton to put the Texans within striking range but TCU also kept their scoring up. TaShawn Mabry drained the second three for the Texans of the half to get them within 12, and then Davene Carter was able to get an easy dunk off a TCU turnover to make the game 44-34. A media timeout with 15:48 to go gave TCU a chance to regroup but during that timeout Coach Lonn Reisman was yelling at his team to just keep playing. The Texans looked poised for a comeback.

The two teams would battle in the ensuing minutes as Tarleton desperately tried to get back in the game. TSU stole the ball with under 15 to play but Teven Jones was called on a travel against the Texans, giving the ball back to TCU. The game would get sloppy as the two teams combined for five turnovers in a row. TCU would call the timeout after their third straight turnover which came in the form of a traveling call.

The Texans were still very much alive in the game with just over fourteen to play, only trailing 46-36. Out of the timeout, Tarleton came out and fouled while on offense, resulting in six straight turnovers between the two teams. After a TCU miss, TSU pulled to within single digits off a TaShawn Mabry layup and the Texans only trailed 46-38. With 11:47. TaShawn Mabry was at the line for three shots after getting fouled from deep territory. The Tarleton crazy crowd was alive and well in Fort Worth and very vocal as they supported the Texans. Mabry went 3 for 3 from the line and suddenly the game had a different vibe to it, a vibe a lot more like a game played in Wisdom Gym. TCU would get fouled on their next possession and go 1 for 2 on free throws to put them up 47-43. This one was going to be a wild one.

The Horned Frogs were able to outscore the Texans 7-2 in a short stretch, mostly due to Texan turnovers, to put them up 54-45 with just under nine minutes to go in the game. EJ Reed was finally able to answer for the Texans putting a shot up on the board to get the score back to 54-47. Mabry would drain another three coming out of a timeout to get the Texans to back within four.

With just over five minutes in the game, Teven Jones hit a three pointer to make it 56-53 TCU and the crowd erupted. Jones pumped his fist as he went back down the court in excitement. The teams would go back and forth without making a basket for a couple minutes as the clock wound down to below four left. The Texans were very excited in their huddle ready to end the game strong. Coming out of the huddle the Texans made one of two free throws to pull within two and were shooting for the lead. After coming up short on the offensive end, the Texans’ defense wasn’t able to hold as Kyan Anderson sunk a layup to put TCU up 58-54.

The refs were not helping Tarleton at all and EJ Reed fouled out with 2:26 to play. The Horned Frogs called a timeout to talk over the end of the game while the Texans made their own adjustments. Coming out of the TCU timeout, Kyan Anderson was able to keep his hot shooting alive by draining a three to put TCU up 61-54. A couple free throws by Anderson to stretch the lead to nine pretty much put it out of reach for the Texans. 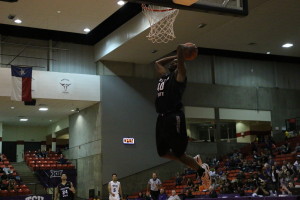 Davene Carter kicks off his senior season with a couple of impressive dunks.
Photo by Azia Branson

The Texans would make it interesting during the last minute of play however. Tarleton forced turnovers by TCU on a five second violation but they weren’t able to capitalize. TCU held on to win the game 69-61.

Overall, it was a great first showing for the Texans, even in a loss. The team was able to keep their composure in the first half while down big and had the deficit to only two with under three minutes to go. TaShawn Mabry scored 23 for the Texans while pulling down 10 rebounds, looking like he had not lost a step since last year. Mo Lee had 14 points in his time in the game and newcomer Teven Jones had 7 points.

The Texans’ next game will be against New Mexico Highlands University on Nov. 14 in Wisdom Gym. Tipoff is scheduled for 7 p.m.