The streak has been broken. 19 games into the season and the no. 2 Texans have finally tasted defeat, and it is not a good taste when it comes from a rival. The Texans had won 18 games in a row to open the season and had a 20 game streak in Wisdom Gym dating back to last season.

The Texans started the game off with a lead on Midwestern State, and with just under 14 to go in the first half, led 9-7, but that would be the team saw of the lead for a long time. 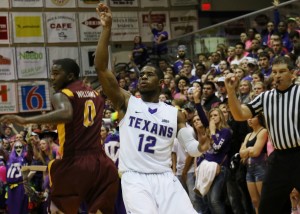 De’Andre Upchurch had a game high 21 points for the Texans.
(Courtsey photo by Azia Branson)

The team had trouble getting open shots and it showed as the Texans shot a season low 37.9% for the game and couldn’t cash in on free throws when they needed them most. At half time they were down 38-29 and the offense was struggling. When the team came out for the second half they were fired up and able to get the MSU lead down to 2 with 11:45 left. From there, the Texans would get close but just could not get on top, and found themselves down 2 still with 6:17 left.

With just under a minute left the Texans were up 65-63, but MSU had already proved they were here to play. The Mustangs tied the game up at 65 but a foul on the score had them at the line with a chance to go ahead 1. MSU missed the free throw resulting in a Chuck Guy rebound and the Texans were able to call a timeout. Coming out of the timeout with just 22 seconds left, De’Andre Upchurch had a decent look but the ball rimmed out. The Texans batted around the rebound as the clock expired and the second overtime game of the night was upon the sold out Wisdom Gym.

In overtime both teams got their offenses flowing as they traded baskets all the way down to the end. With two minutes left the defenses clamped down and the scoring ceased. Chuck Guy was able to get a good look at a three but the shot was off and MSU came down with the rebound.

The Mustangs called a timeout and discussed their plans for the remaining 25 seconds. MSU’s Monzaigo Williams dribbled the ball down past the three point line and pulled up for a jumper. The ball floated through the net and as the ball hit the ground, the clock read 3.96 seconds. Tarleton called a timeout. With nearly 4 seconds left the Texans were able to get the ball past half court and get a shot up, but it was short.

That was it, the streak was over. The crowd was silenced as MSU players celebrated on the Wisdom Gym floor. The Texans still have sole possession of first place in the conference, but Midwestern State is now only one game back of the Texans. The team takes to the road this weekend as they visit Cameron in Lawton, Oklahoma. Cameron is 9-10 on the season with a 3-5 conference record. The game starts at 4 p.m. on Saturday.