It was a back and forth affair between Midwestern State and Tarleton Saturday night that ultimately ended with a win for the Mustangs. The game started slowly as far as scoring goes but the second half would provide more than enough excitement for the sold out crowd here for family weekend. If you’re looking to pick up some tickets for future events, check out these cheap Texans tickets. Get out there and support your home team!

The first half of the game saw the two teams knotted up in a close one. MSU led the Texans 14-13 off of two rushing touchdowns from Dante Taylor. To start the game, the Mustangs were unable to get over the 50 yard line and a sack from Andre Allen on third down forced the Mustangs into a punting situation. Tarleton got the ball on the 19 yard line and Collin Strahan hooked up with Tyler Wright to bring the Texans into MSU territory. Dominique Martin caught his first career pass and scored a touchdown on a 13 yard pass from Strahan. 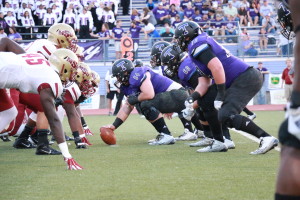 The Texans fall to the Mustangs, 27-23 in the first home game of the season.
Photo by Azia Branson

After MSU got the ball back, Jake Glover hit Breion Evans with a long pass to get Midwestern to the Tarleton 26 yard line. Tarleton was able to get the fourth down stop after a gutsy call by MSU to go for it instead of kicking a field goal. When Tarleton took over on offense they moved the ball down the field and on a big completion to Clifton Rhodes III, Strahan was hit hard. Strahan lay motionless on the field for minutes before he was able to jog off on his own accord, but there was no penalty called on the play. With just over four minutes to go in the first quarter, Strahan was replaced by Eric Matthews. Matthews got the Texans into field goal range but the kick was wide left and MSU would take over deep in their own territory. The Texans defense was able to hold strong and Charles Moore broke up a pass to cause the Mustangs to punt.

Tarleton was not able to move the ball much offensively in their next possession and MSU would soon get the ball back. MSU drove down the field against the Texans and had the ball down at the one yard line where Dante Taylor was able to run it in to tie the game up at seven all. On the next offensive possession, Strahan was able to come back into the game and help the cause. The Texans were not able to get a drive sustained and they soon had to punt. MSU ran the ball back deep into Tarleton territory but it was called back for an illegal block in the back to make MSU start at their own 21 yard line.

After MSU was unable to produce any points on their possession, Tarleton got the ball back and Strahan went to work. The quarterback had a 33 yard run to put the Texans deep into Midwestern territory. After a pass interference was called on the Mustangs, Tarleton was in business. On third down, Le’Nard Meyers caught a pass just outside the end zone and the Texans had to settle for a field goal. With just under two minutes left, MSU would answer Tarleton with a nice offensive drive. After MSU got down to the 11 yard line, Dante Taylor was able to run the ball in for his second touchdown of the half and put the Mustangs up 14-10.

With just under 20 seconds left in the half, MSU was flagged in the secondary and Tarleton was given one more play. That play would prove crucial as it would set Blake Barnes up for a career long 49 yard field goal which was good. The Texans went to the locker room with a bit of momentum on their side. 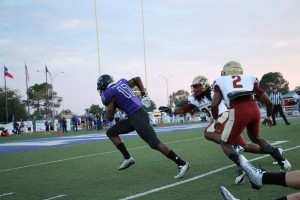 Dominique Martin scores early in the first quarter to put the Texans on the board first.
Photo by Azia Branson

The second half saw TSU starting slowly as they were forced into a three and out after receiving the kick off. The Texans were able to get some leeway after a booming punt put MSU on their own 30 yard line. MSU was able to put a drive together and kick a field goal to extend their lead to 17-13. The next couple series for MSU saw the team drive deep into Tarleton territory only to turn the ball over twice. On the first turnover, Taylor fumbled the ball and Moore was able to scoop up the fumble and Tarleton had the ball at their own nine. The Texans could not get much going offensively and Strahan threw an interception at the 41. The ball was picked off by LaKeith Murray and it was returned to the 21 but MSU would again shoot themselves in the foot due to an unsportsmanlike conduct penalty that placed the ball back on the 36. Once again, MSU would drive deep near the goal line but Glover threw into double coverage and De’Antre Loche was able to pick the ball off. Tarleton got the ball at the 20 and was able to get their offense going for the first time in the second half.

After the interception, Cody Burtscher was able to rip off a big run to get the Texans near mid field. The Texans’ offense was moving and got down to the other side of the field into MSU territory and it looked like Strahan had hooked up with Rhodes for a touchdown, but the call was that Rhodes was out of bounds when he came down with the ball. The Texans settled for a field goal to cut into their deficit—17-16 with just over a minute left in the third quarter.

The Mustangs started the fourth with the ball on their own 36 yard line with just a one point lead and were driving on the Texans. MSU was able to move the ball against the Texans running the ball without much effort and the Texans appeared tired with their hands on their hips in between plays. MSU was called on offensive pass interference from the Tarleton six and pushed themselves back to outside the 20. The Mustangs were only able to get three after that penalty. This was the third time for MSU to be inside the 20 in the second half and they were only able to score three points. With 11:32 left, MSU led the Texans 20-16.

Down just four, the Texans were still not able to get clicking offensively. After starting deep in their own territory, the Texans were forced to a three and out. After a short punt, MSU had the ball already in Tarleton territory at the 48 yard line. The Texans defense would need to hold strong for another possession if the guys had hopes of keeping it a one score game. The defense did hold strong and then some. Taylor fumbled the ball and Marc Martinez was able to recover the fumble. The Texans were in business at their own 31 yard line with just over eight minutes to play. Strahan was able to get Bubba Tandy the ball on a big third down for the Texans on a big pass play. Tandy caught the ball for a 26 yard reception and was absolutely blasted as he came down with it but Tandy was able to hold onto the ball and the Texans were in MSU territory driving. After that, Zac Henshaw was able to run 27 yards to the 11 yard line setting the Texans up well. Immediately after, Strahan hooked up with Rhodes III for a touchdown to put the Texans up 23-20 with 6:29 left. It was the first lead the Texans had since the first quarter.

The Mustangs were able to get a nice kickoff return back to their 29 yard line but were unable to do anything with it. The Texans’ defense held strong coming off the momentum of regaining the lead and held MSU to a three and out. The punt from MSU was a good one and the Mustangs were able to pin Tarleton on their own 11 yard line. The Texans would turn to their ground game to try and chew some clock as they got the ball with just under six minutes to play. The Texans got absolutely nothing going however and were forced to punt back to MSU after just three rushing plays. The Texans had milked the clock down to just 3:30 left but gave MSU great field position. 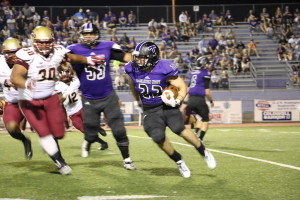 RB Zach Henshaw carries the ball for the Texans during the Family Weekend home-opener.
Photo by Azia Branson

MSU opened their drive on the Tarleton 28 yard line down just three with plenty of time to play. After converting on fourth down the Mustangs were able to drive the ball to the end zone and Mark Strange caught a pass from Glover for the go ahead touchdown to put MSU up 27-24 with just 1:05 left in the game.

The Texans got the ball back and went to work with under a minute to play. After a big play from the Texans got them to the 33 yard line, MSU would get two sacks in the next three plays and Tarleton was on their own 21 with only 33 seconds to play and no timeouts. The Texans would need to convert on fourth and 22 to have a chance and they wouldn’t even come close. The Texans completed a pass for a gain of 10 yards but it was far from enough for a first down. The Mustangs kneeled out one play and the game was over, MSU 27, Tarleton 23.

The Texans will look to bounce back next Saturday in Commerce against A&M Commerce at 7 p.m. After starting the season with lofty hopes and high preseason rankings, the Texans find themselves 1-2 and searching for answers.