ALLEN, Texas— The third matchup of the year between Midwestern State University and Tarleton had some serious anticipation after the two teams split the season series, each winning on the other’s floor, and Saturday’s game lived up to the hype as the Texans beat MSU 71-65.

The game was a close one throughout even though the Texans led by ten at half. MSU came out in the second half and closed that gap quickly and the rest of the game would be a tight one. With just one minute left, Davene Carter was fouled after getting the rebound and the junior was able to hit both free throws.

The game still wasn’t over, however, and with the Texans hanging onto a 65-62 lead, De’Andre Upchurch hit his biggest bucket of the tournament, draining a three over MSU defenders with only 20 seconds left. 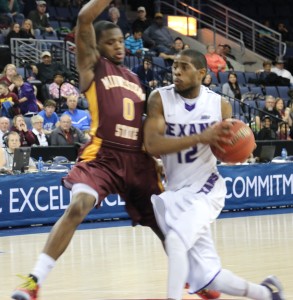 De’Andre Upchurch continued to his spectacular scoring run with 27 for the Texans.
Todd Coley, Texan News

Emanuel Andrews iced the game for the Texans as he hit three straight free throws, giving the Texans the win.

The matchup between the two squads was the third LSC championship game in a row for the two teams and now Tarleton has won back to back championships beating MSU in the final game. Head Coach Lonn Reisman said after the game that he thought it would be a close game because of how familiar the two teams are with each other.

With just a couple of minutes left and MSU having crawled back in the game, it started to look a lot like the game in Stephenville earlier this year when MSU snapped Tarleton’s unbeaten streak, but this night would be different.

“We were going to get that stop and get that rebound so that was our whole focus and mindset,” Upchurch said.

Carter said, “If it came off the glass, I had to rebound. I refused to let anyone else get it; it was too close.”

Upchurch was named tournament MVP and continued his scoring onslaught with 27 points. Upchurch averaged just less than 25 points a game in the tournament. For the game, Davene Carter was the second leading scorer for the Texans, getting 12 points to go along with his game high 12 rebounds. 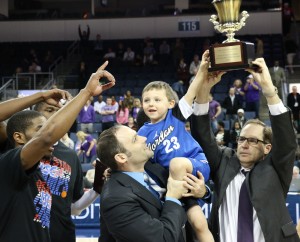 With no. 4 Drury University losing on Saturday, the door is open for Tarleton to possibly be selected as a top seed and let them host the regional portion of the national tournament next weekend.