In what was arguably the most exciting and biggest game of the season, the Texans brought their best and took a victory over Midwestern on Saturday night.

After losing a heartbreaking game Wednesday night to Cameron, the Texans were not looking for another loss and they proved that with their 7-0 start on the Mustangs. The first half went well for the Texans, who kept a lead on Midwestern most of the half. 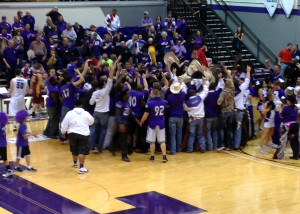 With 8:52 remaining, Jon Cathey-Macklin made a slam dunk that gave the Texans a 19-10 lead and got the sidelines and crowd excited. Tarleton struggled to hold on to their 9-point lead and with 3 seconds left in the half let the Mustangs score once more to take the lead at halftime, leaving Tarleton down 32-19.

The Mustangs held on to their lead for over 11 minutes in the second half but the Texans were not going down without a fight and with 7:44 left in the game, De’andre Upchurch changed the entire pace of the game and tied the score 50-50. The Mustangs took a timeout after what wound up being a 3-point play and the fans packing Wisdom Gym were on their feet. The lead went back and forth for a while until Coleman Furst hit a three-pointer with just over five minutes remaining. The Mustangs continued to foul and Tarleton pulled ahead for a 75-60 win over Midwestern.

Upchurch led the Texans with a career high 23 points on the night and started the biggest momentum changer of the game.

Upchurch said after the game, “When I came here, this is the game I wanted most and to go out there and get the win, that feels great.”