For the second straight year, AT&T Stadium hosted the Lone Star Conference festival. With unranked Tarleton State taking on No. 13 Midwestern State, it was bound to be a duel.

It was the Mustangs that struck first early in the game to take the lead 7-0. The first couple of possessions by the Texans all led to the same thing— a punt. Mustangs took advantage and put up a field goal to improve their lead to 10-0 with 9:31 remaining in the first half.

After recovering a fumble, the Texans marched down the field looking for a score late in the first half and that’s exactly what they did. With 53 seconds remaining, starting quarterback Aaron Doyle ran the ball in to put the Texans on the board trailing 10-7 going into halftime. 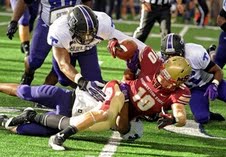 The start of the second half the Texans looked to take advantage of both their senior quarterbacks. The Texans wasted no time in the third quarter driving the ball straight down the field ending with an 8-yard completion from Jake Fenske to Bubba Tandy. Texans took their first lead of the game 14-10 early in the third quarter.

I don’t know if it was first game jitters or just took a little time for the Texans to get oiled up and running but when they did, they continued to drive the ball. The Texans padded their lead with an 18-yard completion to Le’Nard Meyers putting them up 21-10. Then, just seconds into the fourth quarter, Jerome Regal broke away for a 42-yard touchdown run but Blake Barnes missed the extra point making their lead 27-10.

The Mustangs didn’t just roll over though, they made it a game. With a touchdown at the 11:27 and 7:56 marks, the Texans were now just 3 points ahead. It came down to a fourth-and-11 play for the Mustangs that went the wrong way for them. Jared Thames, a true freshman sacked the Mustangs quarterback Jake Glover with 23 seconds remaining, ending the game with a 27-24 victory.

It was the second season that the Texans were able to upset the nationally ranked Mustangs. Last season it happened in Stephenville for the opening game.

The Texans defense did a phenomenal job holding the Mustangs to only 75 yards on the ground.

The pair of running backs almost had identical numbers. Regal had 18 carries for 86 yards, while Zach Henshaw had 19 carries for 87 yards.

Tandy had an average of 10 yards a reception, bringing in four catches for 40 yards and a touchdown. The Texans’ leading receiver Clifton Rhodes III didn’t have a touchdown but did catch eight passes for 50 yards.

“Our crowd was phenomenal,” head coach Cary Fowler said. “I have always said that Tarleton fans are the best and they proved it tonight. They made the difference and deserve a lot of credit for the victory.”

The Texans will play the San Angelo Rams next Saturday at 7 p.m. in San Angelo.

Trevor Peele is a senior broadcast journalism student. He currently serves as Sports Editor for Texan News Service. You can follow Trevor on Twitter @TexanNewsSports