The No. 25 Texans defeated Abilene Christian University 41-34 to snap a three game losing streak to the Wildcats. Texans have made all three of their games come down to the wire and have prevailed so far.

ACU is no longer in the Lone Star Conference and is now an NCAA Division I Football Championship Subdivision team. With the Texans defeating the Wildcats, it is the first time Tarleton has defeated an FCS team since Stephen F. Austin in 2007.

The Wildcats’ first drive against the Texans moved slowly down the field and took 7 ½ minutes off the clock. It was the defense that made plays like it needed to and with the Wildcats going for it on a fourth-and-2 they turned the ball over on downs.

The Texans didn’t score on their first drive but were the first on the board. Bubba Tandy for the Texans had his second touchdown of the season with 2:21 left in the first quarter. 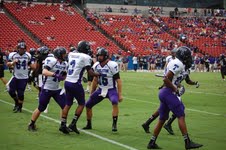 After that score, the Wildcats were at mid-field when their quarterback John David Baker threw his first interception of the season to Desmond Jackson of the Texans who took it 49-yards for a pick-six. The lead was now 14-0, with 1:11 remaining in the first quarter.

At the 10:55 mark in the second quarter the Wildcats finally got on the board with a 36-yard field goal.  After a Texan fumble, the Wildcats scored their first touchdown with 4:25 left in the first half.

In the ensuing possession the Texans had a long drive, eating up a lot of clock, and finished it with a 4-yard run by Jerome Regal. The Texans took a 10-point lead at the break 21-10.

Midway through the third quarter the Wildcats pulled within four when Charcandrick West punched it in from one yard out. The Texans wouldn’t give up though, the next possession Texan quarterback, Jake Fenske found Jenken Frye for the 5-yard touchdown. Texans would increase their lead 28-17 with 1:49 in the third.

Baker pulled the Wildcats right back in the game with a 10-yard run for the score making it 28-24. Just as the Texans had the ball, Fenkse threw a screen pass that was intercepted.  West would give the Wildcats their first lead of the game with a 2-yard run with 11:39 remaining in the fourth, 31-28.

It seemed as if everyone was watching the same exact game from last season’s match-up at AT&T stadium when the Wildcats came back from behind to win.

Both teams had a pair of possession that didn’t go anywhere. But with 1:42 left on the clock the Texans were on their own 27-yard line hoping to extend the game.

Fenske complete a couple passes as well as using his feet once again. The Texans soon found themselves in Wildcat territory. After a defensive offside, Fenkse found Tandy on a fourth down to the Wildcats 25-yard line with 29 seconds remaining.

A completed pass from Fenske, to Frye put the Texans at the Wildcats 17-yard line. The Texans caught another break with another defensive offside bringing the ball to the 12-yard line. Texans would settle for a game tying field goal 31-31.

The Wildcats kick return would run the rest of the time off the clock brining the game to overtime.

Wildcats got the ball first in overtime and with the first pass the Texans had a pass interference call that brought the ball to the 10-yard line. The defense fought hard to keep them out of the end zone. The Wildcats would settle for a field goal putting them ahead 34-31 in a do-or-die situation for the Texans.

At this point sophomore Collin Strahan was behind center for the Texans. He picked up a couple yards with his feet as well as connecting on a short pass. The Texans would settle for a field goal to even the score 34-34 and give them the ball for the second overtime.

Strahan would complete a 6-yard pass to Tandy, and move the ball a little more that brought up a huge fourth-and-1. The Texans would go for it, pitching the ball to Regal for 8-yards and a first down.

After a false start penalty, the Texans were pushed back to the 13-yard line. Strahan then was forced out of the pocket for a no gain. On third down, he handed the ball off to Regal who ran in 9-yards for the touchdown. The extra point was good giving the Texans the advantage 41-34.

The Wildcats would pick up a first down on their first play. But Jake Blount would sack Baker for a 15-yard loss. It was second-and-25; the Wildcats would complete an 11-yard pass, but go incomplete on the next.

It was a fourth-and-9, and after completing a short screen pass, it looked as if the running ACU player was down. Some Texan players ran onto the field and received an unsportsmanlike flag, but the player wasn’t down and pitched the ball, so the Wildcats committed an illegal forward pass. The penalties offset and ACU had another chance at the fourth down.

This time Texans forced Baker out of the pocket and he threw the ball over the end zone. Giving the Texans a win against a new division I team.

Regal would finish the game rushing for 251 yards. He is the 10th player in Tarleton history to run for over 200 yards in a game and his is the third best behind a pair of 260 yard games by Derrick Ross.

Fenske would complete 16 of his 32 passes for 159 yards and a pair of touchdowns. Aaron Doyle did not play this game due to a knee injury but should be back next week.

Le’Nard Meyers led the team in receiving with 82 yards on eight catches, with Tandy having 40 yards. Regal also had a couple catches for 33 yards giving him 284-all purpose yards.

The Texans would finish with a total of 484 yards in offense, 290 yards on the ground and 194 through the air. The Wildcats had 361 yards of total offense, 131 yards rushing and 230 passing.

The Wildcats averaged 65 points a game, and held their opponents to 16 points a game.  Their only other loss came from the hands of Illinois State.

The Texans improve their six-game winning streak back to last season.

This is the first time under coach Fowler that the Texans have started the season off 3-0. They look to take their unblemished record back on the road for more Lone Star Conference play.

The Texans travel to Eastern New Mexico next Saturday, Oct. 5th for their second road game of the season. Kickoff is set at 3p.m. against the Greyhounds.