“I hope that I bring a lot of intensity and toughness to this group and go out and score some points this fall,” Carey said. 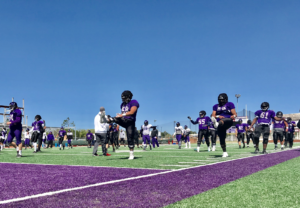 The Tarleton State University football team has been working to improve their technique. Photo by Lorynne Benavides

“This spring season we’ve been trying to tie our technique down, take care of any loose ends, hand placement, footwork, that type of thing that we really need to get better at,” Carey said.

Senior quarterback Derek Kiser said he enjoys his position and hopes to lead the team with the ball this upcoming season.

“I love it, especially when you get to handle the ball every play and kind of be a leader on the field,” Kiser said. “Guys look to me all the time, and I enjoy being in that role. I plan to be a little bit more vocal, and be a guy that guys can come to talk to if they need to and also encourage people on the field and play better.”

Kiser said he has big goals for himself this year as a leader for the team.

“Senior year, I want to go out with a bang,” he said. “That sounds cliché. We haven’t won a championship in a long time here, so winning a conference championship is the number one goal for me.”