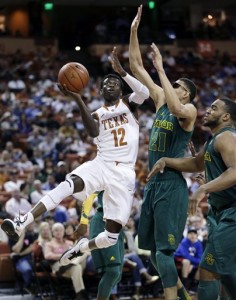 FILE – In this March 4, 2013 file photo, Texas’ Myck Kabongo (12) drives against Isaiah Austin (21) to score during the first half of an NCAA college basketball game in Austin, Texas. Kabongo is skipping his final two seasons to enter the NBA draft.(AP Photo/Eric Gay, File)

Kabongo played just the final 11 games of his sophomore season after a 23-game NCAA suspension for accepting airfare and personal training instruction and lying about it to school officials. He led the team in scoring (14.6 points per game), assists (5.5) and steals (2.0) and was named team MVP despite the shortened season.

The Longhorns finished 16-18 and missed the NCAA tournament for the first time since 1998.

In two seasons, Kabongo started 45 games and averaged 10.8 points and 5.3 assists per game.