A former Tarleton police officer who died in the line of duty may soon be honored at a national monument for fallen officers – 39 years after he died following the chase of a suspect in a campus prank.

The effort to add former 56-year-old officer W. A. Hail’s name to the National Law Enforcement Officer Memorial in Washington D.C. and the Texas Peace Officer Memorial in Austin is being led by his granddaughter, Rhonda Duckworth, a project coordinator with Austin College, and Tarleton’s Assistant Chief of Police Alvin Allcon. Their project was officially announced Wednesday at the grand opening of Tarleton’s new police headquarters at the new Tarleton Police Department.

Duckworth remembers her grandfather as a man with a very stoic stature, who was nevertheless kind and gentle, despite his intimidating size to Duckworth as a young girl. 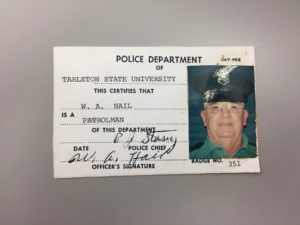 Officer Hail is pictured in his identification card for the Tarleton Police Department. Photo by Alejandra Arreguin.

Hail was pronounced dead shortly after midnight on Dec. 13, 1978. Duckworth remembers watching her grandfather getting ready for what turned out to be his last shift.

“We had actually been at my grandparents’ house eating dinner for, probably, my dad’s birthday,” said Duckworth.

Before her grandfather left to work, he asked her for a hug because she would always give him a hug before he left for work, but that night she chose not to give her grandfather a hug, Duckworth explained right before her eyes started to water.

“I remember him walking out the glass door and that was the last time that we got to see him alive,” she recalled in a recent interview on campus.

On his last shift, on Dec. 12, police received a call about a prank on campus – and Hail was one of two officers who responded. The prank was what was referred to at the time as a “panty raid.”

“It was a common occurrence on college campuses for this point and time,” Duckworth said.

Allcon said the raid was supposed to take place at an all-female residence hall on campus.

Hail and another officer, Kathy Ward-Wilson, were on duty that night.

Tarleton Police Chief Matt Welch said during the grand opening of Tarleton’s police department’s new headquarters, that the chase “was the last day of finals on campus and everyone was determined to have a panty raid on campus.”

When Hail responded to the scene, he saw a group of young men try and climb into the window at one of the female residence halls. Hail decided to chase one of the suspects and fell to the ground and died, according to records, from what a doctor said was a massive heart attack.

Duckworth says she has always known that her grandfather died in the line of duty, but didn’t realize until recently that his name could be added to the National Law Enforcement Officer Memorial and the Texas Peace Officer Memorial. Duckworth says she was listening to President Donald Trump’s speech at the Fallen Officers Memorial in Washington D.C. when she realized this could be a possibility for their family to honor her grandfather.

After Duckworth did her research, she contacted Tarleton’s Police Department to start the process and connected with Allcon. 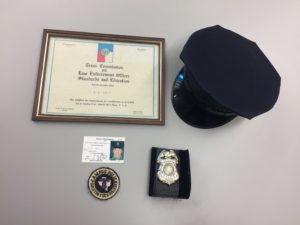 Some of Officer Hail’s possessions including the hat and badge he wore the night that he died. Photo by Alejandra Arreguin.

“I don’t really have an answer for why it’s taken this long,” she said. “It’s just [that] this is the time frame that for whatever reason that it’s meant to happen.”

Ward-Wilson, the officer who was working with Hail the night he died, said she is glad that Hail’s family is seeking to have his service and sacrifice officially recognized.

“I think what they are doing for Officer Hail is outstanding,” Ward-Wilson says. “Every fallen officer, especially in the United States, that stands up for their country needs to be acknowledged.”

Duckworth and Allcon have been working together to gather the required documents and complete the process to give Hail the recognition he deserves.

“It’s been an interesting process to go through and to show proof that he was a police officer and that he died in the line of duty,” said Allcon.

A news story about his death appeared in the Stephenville Empire-Tribune. But, the article listed Hail as a security officer. To be added to the memorial, there had to be proof that Hail was a police officer and not a security officer, said Allcon.

“That was the first hurdle,” Allcon said.

And Allcon said the way Hail died doesn’t diminish the fact that he died while doing his job.

“Someone may say ‘well he died from a heart attack.’ Yeah, he did. But he did when he was on duty performing his duties,” said Allcon. “I’m really honored to be able to do the research and try to give him the recognition and to be able to present his name so that he will not be forgotten here at the Tarleton campus ever again.”

Duckworth said she doesn’t expect to know the outcome of her project until next spring at the earliest.

“I really want make sure that he’s not forgotten and if other police officers have died, that the students here, the faculty, the staff know that somebody actually gave their life trying to serve them,” said Allcon.

Duckworth’s father, Ricky Hail, did not know Duckworth was working on this project until about two weeks ago before the grand opening of Tarleton’s new Police Department.

“I am so honored that Tarleton is doing this for my father after all these years,” Hail said. “It’s just amazing.”

Welch said, in addition to what may happen in Washington or in Austin, a portrait of Hail will be placed in the lobby of Tarleton’s Police Department to honor the sacrifice Hail made for the community.