The highs and lows of being an intramural referee

Some of the 120 or so intramural referees who work at the Tarleton Rec Center say their jobs are challenging, but they seek open communication with players to officiate the fairest game they possibly can.

Intramural supervisor Shane Gallagher refereed for a year and in situations like Goehner mentioned it’s best to remind heated players that it is just a game.

“There’s a lot of hot heads out there and they talk a lot and sometimes it gets heated between people, but I mean, it’s always going to be like that in competitive sports,” said Gallagher. “Usually we can settle it down and they understand it’s just a game and they’re real respectful about it.”

The intramural referees seek to cool down the situation, but there are still consequences. If a player gets ejected from a game for any reason, they will have to meet with a Rec Sports administrator and can even face expulsion from intramural sports.

“It (expulsion) depends on how bad the situation is,” Gallagher explained. ” They’ll (the ejected player) go up and talk to one of our bosses at the rec and if our bosses think it’s something that shouldn’t have happened and it might continue happening and our bosses don’t think it’s a good idea then they could get kicked out for the entire year. But usually the kid just had a moment and our bosses will understand, the student will understand and we’ll let them back in, but they just can’t go back out there until they have a meeting with one of our bosses.”

Referees can still work a certain sport even if they don’t have prior knowledge of it before becoming a referee — something that Gallagher says can lead to some new referee’s feeling overwhelmed. 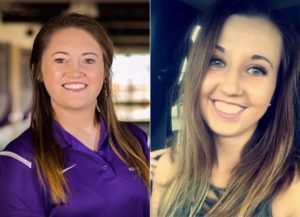 Anthony and Goehner are referees for intramural sports Photo courtesy of tarleton.edu and Goehner’s Facebook..

“It’s a lot at first, especially if you don’t know the game,” he said. “We have a lot of refs that have never played flag football or basketball before and they just get thrown out there so they aren’t really familiar with it and they have to learn the rules also.”

“As much you want to study it (the rules) you just have to do it. You catch on more when you’re watching other people do it and when you do it,” said Goehner. “You know all the rules, but you have to see it to apply it.”

Gallagher says that the supervisors try to help with whatever confusion new referees may have by easing them into the sport they are officiating.

“We help them as much as we can and about the first week we get them to watch and really help them out. After that, they usually keep understanding it but if they need any extra help they know they can come to us,” said Gallagher.

Even if a referee has complete knowledge of all the rules, there can still be a major miscommunication on the field. Because intramural rules differ from the rules of high school, college and even professional sports, it can lead to some players calling foul.

“A lot of them (players) think they know more than we do,” said Goehner. Goehner said that calling foul on aggressive plays leaves many players frustrated.

Gallagher said that even though that is a very common occurrence, people normally understand after he explains.

Anyone wanting to be an intramural referee, you can check the Tarleton Campus Rec social media for officiating clinic dates and times.