The Making of a president

Forty-seven years ago this month, Tarleton State University President Dominic Dottavio showed up for his freshman year of college at Ohio State University in Columbus, Ohio. He started classes, struggled to find time to study, competed in foosball tournaments and tried to figure out which one of his roommates was going to attempt cooking dinner.

One day last spring, Dottavio, dressed in his normal attire of suit and tie, sat on a couch in his office on the second floor of the administration building, with his hands folded in his lap and reminisced about his days as a college student.

“There was zero expectation that I would go to college,” Dottavio said. “My father never graduated from high school, my mother was a waitress and the notion of college was not within their thinking.” Neither of his two older sisters had attended college, and college was not something his family necessarily expected from him.

“The good news for me was that the friends I had in high school that had the expectation of college from their parents,” he says. “This speaks powerfully to having great people in your life at the right time.”

As a high school student, Dottavio worked his fair share of odd jobs, from busing tables to stocking shelves. However, it was after he spent a season selling Christmas trees that he realized his appreciation for the natural environment and found a focus for his college education.

“I happened to stumble upon a job selling Christmas trees,” he chuckled. “At what was at the time called Clarkons, it was like an equivalent of a Wal-Mart.” 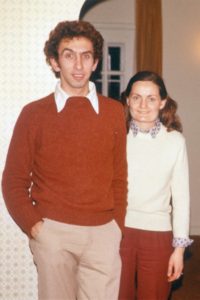 After the holiday season ended, he was asked to stay on to help with the management of three Christmas tree farms. “When I started doing the work outdoors, it just really connected very powerfully with me. I thought, ‘If you can do this for a living, or something related to this, I think I would like to explore majors that would align with that’.”

As an undergraduate, Dottavio says he was involved in church-based activities and played intermural softball and basketball.

“Ohio State was a very different place [than Tarleton]. You had to take a bus to classes sometimes because of the size of the place. But it would normally be very much what you see here,” Dottavio recalled. “You would be taking 15 to 16 hours of course work. For me it would be classes from about eight to one or two during the day, trying to find study time and then trying to reserve evenings for time with our friends.”

Dottavio was an undergraduate student from 1969 to 1973, at the height of the Vietnam War. Riots and protests on college campuses were a regular occurrence. Dottavio was a first hand witness.

“Ohio State went through its own significant periods of riots,” he recalled. “If I remember correctly, Ohio State had seven students shot, none fortunately were killed.”

He recalls fellow students pulling bricks from the sidewalks and walls across campus. They would hide bricks and other projectiles around campus and use them to hurl at other people during protests that would take place on campus.

“The campus ended up shutting down in May of 1970 for an extended period of time because things became so violent,” he said.

In the spring of 1971, Dottavio lived across the street from the main entrance of campus.

“It was like watching TV, because from the living room window of our apartment you could see tear gas going off and students were running across the lawn, actually coming into our house looking for shelter from tear gas,” Dottavio said. “It was an incredible experience to be front and center of. I never participated in the riots but I certainly saw them taking place. It left an impact on every student that saw the unrest, whether or not you understood it, or participated in it or not. You could not help but walk away understanding that there was some tremendously passionate feelings about what was going on a national scale.”

He went on to explain how much of an educational experience that time was for students. It was an experience that led students to realize that it was a time about more than just going to classes and taking exams.

“But indeed there were broader social issues out there that people cared passionately about, he said. “Having an opportunity to witness that really motivated you and encouraged you to try and gain a deeper understanding of what is it that these people are so passionate about and is driving this kind of conversation.”

Dottavio recalled that after simply “doing okay” his first two years of school, he finally began hit his academic stride in his junior and senior year. This, along with the support and encouragement of a mentor and his friends, he decided to pursue his Masters degree.

“As I went into my junior and senior years I ended up with a fleet of friends and roommates that clearly had higher exceptions for masters degrees and Ph.D.s,” Dottavio said.  “I also had a gentleman that served as a mentor to me, a very successful businessman, and he encouraged me as I became better at this idea of school.”

With full support from his friends and mentor, Dottavio applied to Yale University where he was, much to his surprise, accepted into a Master’s program for environmental studies, from which he would graduate from in 1975. It was during his time at Yale that Dottavio first began to realize the importance of leadership and decided that he wanted to set the same example for others that his professors had set for him.

“These were people that were leading their professions and had profound influence not just on the students that were in their classroom,” Dottavio said of his professors at Yale.   “Leadership wasn’t about how many people you managed or how many people you directed, or having employees report to you. Instead, it was about how it is that you influenced people in more subtle ways to aspire to greater things.”

Dottavio went on to finish his masters and accepted a job working as the assistant director for a camp program in the College of Natural Resources, as well as teaching a class at Purdue University, where he began to work on his Ph.D. part time. After receiving his doctorate in 1979, he worked as the Regional Chief Scientist for the National Park Service and he worked for the U.S. Department of the Interior as a lead researcher before being named president of Heidelberg College in Tiffin, Ohio in 2002. In 2008, he was hired by the Texas A & M University System as Tarleton’s 15th president.

As a college student, he said, “I had absolutely no idea that I would ever be a college president. It was probably the furthest thing from my mind.”

While Dottavio may not have started his career path with university presidency in mind, he has led at Tarleton, to develop a student’s success driven culture.

“I think we try to instill [this] in a powerful way here,” he said.  “The idea of student success, trying to take students where they are, understand the complexity of life issues they may be experiencing and trying to assist [them] through mentoring programs and a variety of other success approaches to truly have students become successful.”

As Tarleton president, he challenged the campus to define its core values and become “the premiere student focused university in Texas and beyond.”

When asked about what life after Tarleton for him and his wife Lisette will look like, whenever that may come, Dottavio responded, “primarily it will involve our grandchildren. Right now we have two. Little Dominic is going to be three and Abigail is just six months old, so our intention is to spend a lot of time with grandkids.”

They also plan to spend time volunteering, whether it is in National Parks or even overseas missions. They feel it is important to continue giving back to their community in service. They feel that it is part of being a good citizen.

“I will give you two things I would like to be remembered for here at Tarleton,” Dottavio said. “The emphasis we place on student success, that vision statement to me is very powerful and very real and is something I hope lives for decades after I am gone. And the second thing would be the core values. I believe deeply that those core values, if applied during the time a student is here and they are applied during their lives that they will indeed become better students and better citizens.”