John Forson and Kenneth Augsburger don’t live in Erath County, but likely know more about what’s going on than the people who do. The two men – once coworkers but now competitors – are the administrators of rival Erath County Breaking News Groups on Facebook.

Both men also are disabled – Forson from emphysema, Augsburger from peripheral neuropathy. Unable to work, the two men say their disabilities make it possible for them to devote much of their time to managing the two news groups from their homes.

Forson, 56, says his Facebook Group is a place for people “to look and see what’s happening around them. Before, you never did know what was going on. Now, you know all the wrecks that are happening. The wrecks have always been happening, just nobody knew about it.”

Forson describes himself as “just an ordinary guy at home that’s pretty good at telemarketing and internet searching. I got police scanners and I search a lot of news groups and news outlets.”

Augsburger considers himself to be community-oriented and says he’s always trying to help others, and running his news group allows him to do just that.

Augsburger, 50, manages the group from his home in Hico in Hamilton County. Augsburger says the peripheral neuropathy from which he suffers developed over time.

“It’s a gradual process,” he explained. “It just basically took me out where I couldn’t walk. I have it in my arms, [and] legs.” Augsburger says his disability leaves him in constant pain and that he’s “on pain medications and I’ll probably be on [them] for the rest of my life.” 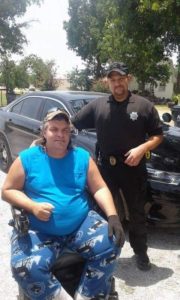 Augsburger says that running The New Erath County Breaking News group is his way of helping those around him. Photo courtesy of Augsburger

Augsburger says running the news group “is just something I enjoy doing” and it helps to take his mind off of that constant pain.

The New Erath County Breaking News group, Augsburger says, is “like a one stop place where they can come to get all the news.” Recently shared articles from Texan News, The Stephenville Empire-Tribune, The Flash Today, The Dublin Citizen and more can be found on the group’s Facebook page. The group frequently features news about Tarleton State University, public school sponsored events, jail log updates and posts from police departments in the Cross Timbers area.

The New Erath County Breaking News group has over 3,000 followers and Augsburger says that he’s seeing 20 to 30 new members join each day. “I’d like to see it grow and I want to try and get the community … more involved in the page,” he explains. “It’s just something I enjoy doing.”

Before his disability forced him to quit working, Forson spent 12 years transporting railroad tracks. Just breathing, he says, is a struggle… “I can’t breathe,” he explains. “I can’t eat nothing without losing my breath.”

Forson said his Facebook group grew more popular after sharing information about armed robberies, a kidnapping and a high-speed chase in which the driver was shot and killed by the Stephenville SWAT team.

The kidnapping, he said, had a happy ending. The baby was taken on Mother’s Day. His breaking news group was able to help police find enough information and bring the baby home the same day it was taken. “They got the baby back that night,” he explained. “It turned out real good.”

Forson says lost pets and possessions are found on a daily basis because of the Erath County Breaking News group. He says more than 2,000 lost pets have been found through the Facebook group.

“I don’t care what you lost in Stephenville, these people can find it,” said Forson.