The new age of activism: Tarleton’s most dangerous man

Picket signs, sit-ins, walk-outs, protestors chaining themselves to trees. These were common ways the Sixties generation showed support for the causes they believed in. Whether it be the War in Vietnam, the destruction of the rainforest, or civil rights, activists were out in full force to express themselves and stand up for their causes. 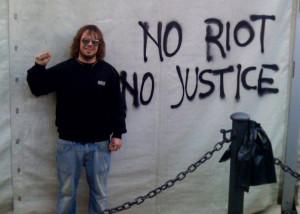 Today, there’s a resurgence of activism, but with a modern flare among members of the Millenial Generation – people like Tarleton State University senior Drew Slattery.

Much like activists toppling old regimes across the Middle East with the aid of social networks, Slattery saw just how powerful this medium could be when he created a page on Facebook to save a Tarleton tradition.

The Purple Pancake Breakfast held during the week of homecoming has been a long-standing tradition on Tarleton campus. Since 1983 the Student Government Association has been cooking a breakfast at midnight the Thursday of homecoming week. Last fall there was controversy as the administration proposed changing the traditional breakfast time of midnight to 10:30 p.m. for the stated reason of concern for the effect on students academic performance. The students responded with an uproar. Slattery, who will be graduating this May, decided to create a page on Facebook for students to voice their opinions and show support for this cause.

“All I really did was organize the students from a non-official level,” Slattery said. Though the SGA was the official voice for this sentiment, Slattery explained his role as, “the underground, guerilla version of that.”

It was soon evident how powerful Facebook could be as over 5,000 people joined Slattery’s Facebook page called “Purple Pancake Protest.” It collected more than 400 posts in agreement to keep the original time for the breakfast. “Born from that was the 12 campaign,”  Slattery said. In that protest, students wrote the number 12 on their hands and car windows across campus to show support for the midnight tradition.

“The thing about Facebook is you have to find something that matters to people,” he said. Commenting on how society is oversaturated with one cause after another he said, “300 people probably wouldn’t have responded to starving children.”

Slattery had definitely found something that mattered to the students of Tarleton and because of the enormous response a compromise was made with administrators to have the breakfast begin at 11:00 p.m. The name of the Facebook page was even changed to “Purple Pancake CELEBRATION” to represent the victory of this movement. If Slattery has his way this will be the first of many victories to come in regards to movement and change.

Slattery a 24-year-old from Brenham, Texas who is majoring in public relations and event management plans after graduation this May to leave for the Peace Corps. “I’m not the kind of person who can join the rat race,” he said. “I want to work for non-profit charities doing fundraising for them.” Slattery is focusing his future on making a positive change in the world.  Slattery counts among his role models, Black Panthers founder Hewey P. Newton, who Slattery admires for his strong beliefs and ability to foster change and organize communities. Like Newton, he hopes to show his generation that they too can make a difference – even if by social networking instead of sit-ins.