Nationwide, college students are taking longer than the traditional four years to graduate with a bachelor’s degree—and that trend includes Tarleton.

Data compiled by the Texas Higher Education Accountability System show that more than half — 52.4 percent — of the students who entered the university in fall 2009 took six years to graduate.

Those numbers improved compared with students entering Tarleton in fall 2008, with 53. 1 percent of them taking six years to graduate. View the data at http://tinyurl.com/ya4uey7d

“The retention and completion initiatives implemented by the university in the past few years appear to have had an impact on students who have most recently enrolled by catching them earlier rather than later in their academic studies,” the Texas Higher Education Accountability System said.

Tarleton rewards students who graduate in four years with a $1,000 tuition rebate. To qualify, students may not take more than three semester hours more than the mininum number of hours required for a degree. So a student who completes a bachelor’s degree that requires 120 hours cannot have more than 123 hours attempted. The student also must graduate within four calendar years for a four-year degree or five calendar years for a five-year degree.

For more information about the rebate, visit www.collegeforalltexans.com or www.tarleton.edu/registrar/timelygraduation/1000tuitionRebate.html

Graduating in four years is a “myth,” a study of national graduation rates by Complete College America, a nonprofit organization that works with states to increase college completion times, found. 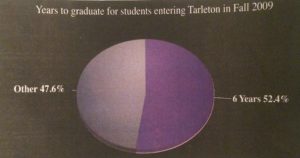 Nationally, the six-year graduation rate for first-time, full-time undergraduate students seeking a bachelor’s degree at public institutions in 2009 was 59 percent, the National Center for Education Statistics reported. Only 50 of more than 580 public institutions reported that more than half of their students graduated in four years.

“The vast majority of American college students do not graduate on time…but many more can – saving themselves and their families precious money,” Complete College America reported. Timely graduation also saves the State of Texas money, which is why the state is working on programs to promote finishing college in less than six years.

Most bachelor’s degrees at Tarleton require 120 credits, meaning a student could graduate in four years by taking 15 hours two semesters of each year. But some degrees, such as electrical engineering and civil engineering, require 126 hours.

Caleb Walker, a junior civil engineering major, said he expected to graduate in May 2018, but it could be 2019 because “some of the classes are so condensed into one semester, when the classes should take up two semesters,” he said.

As a result, some students fail and have to retake the class, he noted.

“Also, I take less hours to manage my difficult classes,” he added. “Degree plans are set up for students to take 18 hours, and that’s very unrealistic.”

“I have a few classes that are only offered every two years,” he said. “It is an upper-level computer science course that has a lot of pre-requisites that I didn’t have when the class came up last spring. This put me back a whole year. I decided to pick up a minor to remain a full-time student during that time.”

The rising cost of tuition also means some students can’t afford to take 15 hours a semester, or they are working and don’t have the time to take a full load.

Ty Kage, a third-year history major, said he’s currently on the six-year graduation plan “simply due to the fact that I can only take the minimum hours of classes because I have to work full time to be able to fund my own education on top of paying my bills.”

Kage added that “things are so much more expensive than they were 10 years ago and we are having to compensate for that.”

Junior Bryonnah McCarty said she got set back a year from graduating because of the cost.

“I would be graduating on time if it weren’t so expensive,” she said. “I have to take the minimum amount of classes so I can afford to stay on campus.”

“If tuition went down, more students would graduate in a four-year time span,” McCarty added.

Another reason for longer graduation rates is that some transfer students find they lose hours when they switch from another university to Tarleton.

“When I was advised and attempted to sign up for classes, half of the hours I have already accumulated from my previous university were not able to be substituted or put into place for any class here,” said Rebecca Schuler. “Therefore, I just lost all of those credits and my graduation was pushed back a full semester.“

“People often get distracted by other things or change their degree because they come to college not knowing exactly what they want to do,” said nursing major Lauren Brouhard.

Junior Troi Allen said majors and minors determine how long it takes a student to graduate.

“I am a business major with a marketing minor. Since my major and minor are sort of in sync, there is no issue for me to graduate on time,” Allen said. “ However, I do know people with minors that has kept them longer. I am certain that’s why it takes students longer to graduate.”

Shelby Drews, a communications major with a minor in digital media, said some students are “changing their majors constantly and they are changing them too late. They can’t figure out what they want to do with their life.” .

Samantha Olinger admitted she is about a semester or a year behind graduating in four years, “so I might end up being a super senior. I do not know how people graduate on time, to be honest.”

She also joked about Tarleton’s tradition that holds a student will not graduate in four years if he or she steps on the university seal.

“My first year here I stepped on the seal and did not really think much of it, but maybe this is why I may not graduate on time,” Olinger said.