Parum is a graduate of Vernon High School and enrolled at Tarleton in 2013. She was originally a sports medicine major and athletic trainer during her freshman and sophomore years, but said she switched to agricultural services and development after some personal life changes. Although she’s involved in Alpha Omicron Pi, Collegiate FFA and Block and Bridle (an animal science and agriculture based student organization), Parum said she still wanted to be involved with Tarleton’s athletics and spirit.

Parum said  her roommate Cierra Mouton, senior, suggested that she apply to become the Texan Rider. Parum did and was interviewed by Blaine Hamilton, Tarleton’s head cheer coach. Parum said she was offered the position the following day. 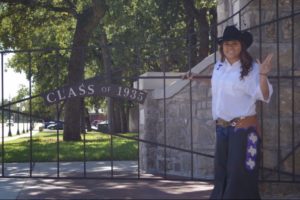 Being named Texan Rider “feels great,” Parum said. “It’s definitely an honor. When I applied to do it, I had no idea that it was gonna be this big of a deal and coming and interviewing with you and like, people seeing me on campus saying ‘Oh you’re the new Texan Rider.’ It feels really good to be recognized as that.”

As the new Texan Rider, Parum plans to bring spirit back to Tarleton. “From my freshman year, four years ago, the spirit has like, declined a lot and so I’m really hoping that all of the spirit organizations can come together and help bring all that back up.”

One of her plans includes bringing back an actual horse for the Texan Rider during football games. “I’m gonna try to bring it back. We’re gonna try to get a horse that’s used to all the cannons and the loud crowds and stuff. But I have a horse that’s kind of used to all of it. My dad is in a riding club and so, he is going to help us out with that.”

“Obviously the bonfire is a big deal,” she said. ” I get to help carry and light the bonfire, so that’ll be a lot of fun and then just really getting the crowd involved. One of the things in my interview that I said was that I like the poo. They go in and out of the crowd and stuff and they try to get everybody involved.”

Parum even plans to get in contact with a former Texan Rider to learn as much as she can about being Tarleton’s new official mascot.

“I’m definitely going to be reaching out to Jordan, who was the Texan Rider a few years ago, and get her aspect and her view on everything and see what I need to be doing. It’s still a work in progress but we’re definitely figuring it out.”