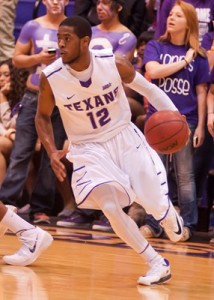 De’Andre Upchurch led the team with 23 points on the night and Chuck Guy recorded 14 points and 11 assists. Two other players, Emmanuel Andrews with 13 and Tashawn Mabry with 10 scored in double digits on Saturday.

The Texans shot extremely well with 50 percent from the field in the first half and an even better 59.1 percent in the second half. The team also went 11-19 and shot 57.9 from behind the arc making it their third time this season to shoot better than 50 percent from the three point line.

The Greyhounds happened to outscore the Texans in the second half 43-41 but never cut the difference to less than 21 points. The Greyhounds managed to get the score to 66-45 but Tarleton never let up and continued to match point for point until the final score of 86-64.

The Texans are now 17-0 overall and 6-0 in the Lone Star Conference leading up to their next game on Saturday, Feb. 1 at 7 p.m. against Texas A&M Commerce in Stephenville. Come out and support the Texans with a chance of witnessing history as the Texans look to continue their winning streak and set a new school record of 18 straight wins.