Their lips – and investigation – are sealed

That’s been the official response for more than a month to questions about the investigation that led to former Student Life Vice President Rusty Jergin’s departure from Tarleton State University.

Not a single regular member of the Texas A&M System Board of Regents returned phone calls from Texas News in recent weeks.

Steve Moore, the system vice chancellor for marketing and communications, did, however, leave a voicemail for a reporter.

“It’s no use calling the regents, they will not have any comment,” Moore said. 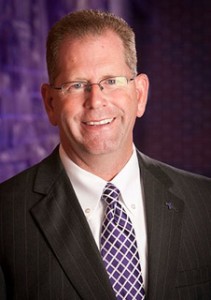 At yesterday’s meeting of the board, Regent Judy Morgan said that the Jergins investigation didn’t come up for discussion.

Colton Buckley, the first ever Student Regent from Tarleton, last month would only say in interview, “All that I can say is that there is an ongoing investigation.

Tarleton President Dominic Dottavio told Texan News last month that all he knew about the investigation was what he read in the news.

“There’s nothing more that I know than was written in the paper,” he said. “It is being investigated by the Texas A&M University System.”

Two reporters last month found Jergins in shorts and t-shirt at his home. He said “hi,” that he was going “good” and “nope” when asked to comment on the investigation.

Texan News called Jergins the Friday of the announcement that he was released from the university, but the call was not answered or returned.

Texan News attended yesterday’s meeting of the board of regents. The subject of Jergins didn’t come up – at least during the public part of the meeting.

After the meeting, reporters asked Regent Regent Judy Morgan if Jergins was discussed in their executive session. It wasn’t, she said, adding that she could not talk about it. 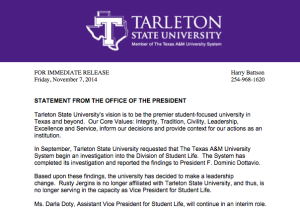 On Friday Nov. 7 Harry Battson, Assistant Vice President of Marketing and Communications, sent an email to faculty and staff. “In September, Tarleton State University requested that the Texas A&M University System begin an investigation into the Division of Student Life. The system has completed its investigation and reported its findings to President F. Dominic Dottavio.”

“Based upon these findings, the university has decided to make a leadership change. Rusty Jergins is no longer affiliated with Tarleton State University, and thus, is no longer serving in the capacity as Vice President for Student Life.”