Things to do this Halloween season

Halloween is right around the corner and many students at Tarleton State University are probably wanting to know about any pumpkin patch or haunted attraction that they can visit around Erath County.

Texan News has compiled a list of places to visit close by for the approaching Halloween season. 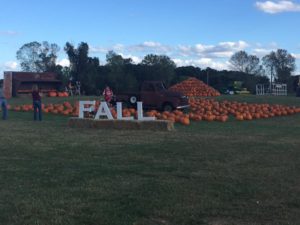 According to lonestarfamilyfarm.com, Lone Star Family Farm was founded in 2013. In 2009, Josh and Ashley Ritchey began growing and selling watermelons and cantaloupes to grocery stores in the Lubbock, Texas area. They grew their produce on the only land that was available for leasing at the time – development lots that were for sale inside the city limits of Lubbock. After a couple of years of growing watermelons and cantaloupes and facing various challenges, the Ritcheys’ began exploring ways to cut down on harvest labor.

They had two great pumpkin patch seasons in Lubbock then received notice that their pumpkin patch land was going to be sold to a big box retailer. After weighing various options, the family decided to make the move to Stephenville, Texas where they had recently leased some farm land. Stephenville offered the Ritcheys the opportunity to continue their new fall tradition. With a “Young Farmer” loan from the USDA Farm Service Agency, Lone Star Family Farm was purchased in the summer of 2013. The following October, the new pumpkin patch opened—offering pick-your-own pumpkins, hayrides, photo opportunities, and other fun attractions for groups and families.

Lone Star Family Farm offers many attractions for the whole family including: 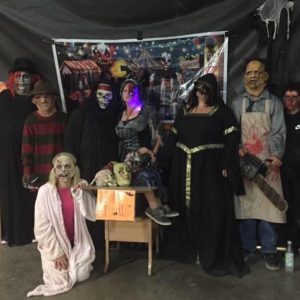 ‘Tis the Season Nightmare at the Arena is open from 8 to 11 p.m. Friday and Saturday through October.
Photo courtesy of Stephenville Empire-Tribune

The largest haunted house in the area, ‘Tis the Season Nightmare at the Arena, is open once again for their second year at the Erath County Livestock Arena.

Amy Stoker runs the haunted house with her family.

Stoker said it takes about 20 minutes to get through and they have about 25 people who help put on the haunted house each year.

“We have around 25 people but it’s not enough so if anyone wants to volunteer, it would be great,” she said.

The haunted house features a scary carnival and a spinning tunnel of darkness.

‘Tis the Season Nightmare at the Arena is open from 8 to 11 p.m. Friday and Saturday through October.

Tickets are $15 per person and can be purchased at the door.

Stoker encourages everyone to come out because “this is the last weekend and Halloween night [that we’re putting on the haunted house].” 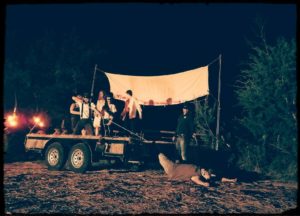 Haunted Hills Campground, located just outside of Glen Rose, is owned by Cortni and Josh Davidson. They have done backyard haunts in Austin for the last 10 years. They moved to Glen Rose in May and decided to utilize their property and put an attraction on it.

“Our attraction includes several options for customers. There is a food truck on site each night. There are merchandise vendors, card readings and various live performances from different local artists,” Cortni said. “The hunt itself consists of a hayride and walking trails through the haunted forest. General admission gets you access to all parts of the attraction.”

The haunted campout is called Dusk till Dawn. This attraction is for overnight campers and it is still open until Oct. 31.

This is their last weekend to open but they are still taking overnight reservations for people who want the full experience.

“This Saturday is actually Bite Night and it’s half price for all motorcycles,” Cortni said.

Cortni also encourages everyone to come out for their last weekend open.

“We are open rain or shine. The front gate can be misleading because it is hard to see in the dark but don’t let it scare you away. We are back there having a 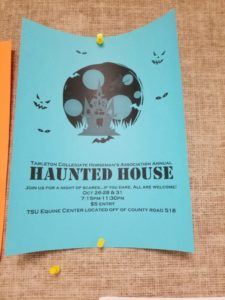 Tarleton Collegiate Horseman’s Association Annual Haunted House is open on Oct. 26-28 as well as the 31.
Photo by Shelby Clayton