Thomas’ 26 not enough to lift TexAnns over Aggies

STEPHENVILLE – The (12-8, 5-6) Tarleton State TexAnns fell to the (12-8, 9-2) Aggies of Cameron 65-62 on Saturday evening in Wisdom Gym. Kathy Thomas had a career day in the second half. Her 23 points after the break matched the TexAnns’ total from the first half, and she finished with a game-high 26 points. Ikpeaku Iwobi had her seventh double-double of the season, finishing with 10 points and 11 rebounds.

Bailey Wipff and Averie Mack each had 7 points. Karli Moore (5), Travanti Downes (4) and Meagan O’Dell (3) rounded out the scoring. As a team the TexAnns shot a season-low 30% from the field on 22-73 shooting, compared to the 51% shot by the Aggies. Tarleton State struggled to get shots to fall on Jan. 17 against the Aggies in Lawton, and continued to struggle Saturday. The TexAnns have now shot a combined 44-139 from the field against the Aggies for an abysmal 31.7%.

The TexAnns were able to out rebound the Aggies on the offensive glass 21-3 and committed 10 fewer turnovers (12-22). Both stats are what kept Tarleton State in the contest.

Cameron got on the bored first with 3-seconds left on the shot clock, a theme that continued throughout the half. Thomas responded on the offensive end for the TexAnns with a trey from the top of the arc and TSU was out to its first lead of the opening frame.

The next four minutes were scoreless for both teams. Wipff hit on the TSU end after an Aggie basket and reclaimed a one-point lead. Cameron took its first lead at the 9:30 mark, but Iwobi answered right back with a bucket from the low post. The TexAnns were tied at 14 with less than nine to play in the half.

The first half was one to forget for the TexAnns. They shot an awful 24% from the field on 9-37 shooting and were just 2-7 from behind the arc. The Aggies shot 48% from the field, had two more rebounds, two more points in the paint and took a 28-23 lead into the locker room.

Despite the sluggish offensive start, the TexAnns lead for much of the half and never trailed by more than 6 points. Their 5 turnovers to the Aggies 14, and the 9 offensive rebounds were keeping the TexAnns in the game.

Tarleton State continued to battle in the second half despite continuing to struggle from the field. McGrath found O’Dell at the top of the arc, and she delivered the first triple of the half. The three ball gave the TexAnns their first lead since the 10:54 mark of the first half. A few possessions later, a Wipff three-ball put the TexAnns back on top 43-42 with a little over 9 minutes to play. 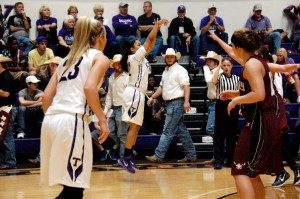 An almost four-minute scoring drought, combined with a 9-0 Aggie run had the TexAnns on the wrong side of a 54-47 game. Thomas hit her 77th career three, moving her into a tie for 13th with first-year TexAnn head coach Misty Wilson, and pulled the TexAnns to within five.

Another three ball with under 2 minutes to place closed the Aggie lead to six points and gave her sole possession of the number 13 spot on the all-time list.

Tarleton State stole an inbound pass down 4 points with 38 seconds left to play, but failed to convert the opportunity. Two Thomas free throws were followed by 2 free throws from the Aggies, and although the Thomas three at the buzzer went in, it was too little too late for the TexAnns. Cameron swept the regular season series with a 65-62 road win.