Advancements have been made in Title IX

At least 60 Title IX cases have been filed at Tarleton State University involving sexual assault and gender discrimination since 2013, records show. Title IX investigators say victims often have more of a voice when reporting to them rather than to police. For the first time this fall, victims have the opportunity to disclose to investigators what they would like their violator’s punishments to be and to write the violator a victim impact letter.

Since Jan.1 to April 14 of this year, Title IX has had 17 cases filed. In 2015, there were 30 cases filed and 13 filed in 2014. The Title IX report was emailed to Texan News by reporter Sarah Rafique of the Lubbock Avalanche Journal, who retained it under the Texas Public Information Act.

Rafique’s conclusion after reviewing the report was that, “There were a total of 60 allegations for that time period, including instances of hazing, domestic violence, sexual assault, rape, gender-based harassment, indecent exposure, unwanted touching, groping, coercion and distribution of digital media. Of those allegations someone was found responsible in seven cases where sexual assault, sexual harassment, distribution of digital media or gender-based harassment occurred.” 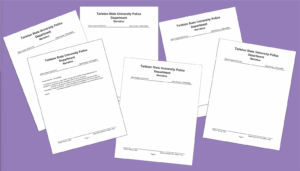 Darren Keith, Title IX and clery compliance coordinator, said that about 60 percent of the cases filed were instances that occurred before the student attended the university. Keith said he believes this is because students don’t know what Title IX is while in high school.

“It’s sad that Title IX isn’t being pushed as much at the High School level…” Keith said.

Keith said after hiring Caris Thetford, substance abuse and violence prevention program coordinator, there has been an increase in preventative training and awareness.

“…we’ve seen an increase in the number of people reaching out to get help. That doesn’t mean we have more sexual assaults on campus, that means that more people are trusting our process to get help and resources,” Keith said.

When other universities have errors regarding Title IX, Keith said he blames those errors on the lack of training, process and knowledge of employees.

“I do think that a lot of times, universities get on their process and they start to leave compassion out for the people involved,” said Keith. “The way that I think of cases coming in as, I got three little girls from three to eight and I’m also a foster parent. So when I see a young lady come in – and I’m generalizing (gender), I look at them and I can see something that’s reflected in one of my kids, because they are all different. And how would I want my child to be treated if they were sitting there.”

To ensure victims of Title IX cases are properly protected and that violators are punished appropriately, Tarleton invested in the program, Association of Title IX Administrators (ATIXA). The program provides training for individuals who are involved in the process of these cases and sets the standard for investigators to be thorough, reliable and impartial.

When making a Title IX claim to anyone on campus, the claim is funneled back to Keith.

Faculty members are considered “responsible employees,” which means they are required by federal law to report what they are told, even if it’s a rumor. Keith said a lot of reports are made by Residential Living and Learning (RL&L), but there are two confidential sources on campus: the counseling department and the health center.

There are seven steps that are included in the Title IX process: notice, preliminary inquiry, notice of allegation, comprehensive investigation, finding, sanction and appeal.

“Once we receive notice, I’m required to do a preliminary inquiry, which is not the investigation, but making sure that we have enough to continue forward with an investigation.”

If there is enough evidence for the case to be considered under Title IX, Keith will move on with the preliminary inquiry. This means, Keith will notify both the reporting party (the person who makes the claim) and the accused about the notice and meet with them individually.

Keith first meets with the reporting party and provides resources to help them, including health and counseling services, academic or police assistance and housing requests. Keith will also explain Title IX’s process if the investigation goes further. At this time, Title IX is not officially investigating.

To move forward with the investigation, the university requires permission from the reporting party, unless a weapon was involved, the accused is a serial rapist or if it’s in the best interest to protect the university.

Even if the reporting party doesn’t want to move forward with the investigation, Keith will still reach out to the accused to inform him or her that an allegation has been made. During this meeting, Keith goes over the same exact topics that were discussed with the reporting party.

Keith said there is a lot of talk about how in this process there’s not a lot of input by the victim. So during the inquiry process, Keith asks the victim what their desired outcome for the accused is.

“… I ask them, ‘what is your desired outcome? What would you like to see done if they are found responsible?’. And I explain that our investigators will put that into consideration. But we do want to know what you would like to see happen.”

During the entire process, the reporting party and accused are to be treated the same way according to federal law. Keith also gives both parties letters of no contact and discusses retaliation.

If the reporting party wants to move on, Keith reviews the information and hands the case to the investigators, a male and female team. Keith now acts as an eye in the sky, making sure the Title IX process is being followed.

Keith said Title IX can be an easier route for a victim rather than immediately involving the police and pressing charges. Keith said sometimes when the victim is telling their story, it can trigger their mind to re-live that experience. When going through Title IX, the victim only has to tell their story once. But when involving the police, the victim would have to tell their story to the initial patrol officer, a detective, a District Attorney’s investigator and then testify in court if the case makes it to trial.

Keith also mentioned that Title IX cases are handled in a 60 day period, while a case like this in the hands of the legal system, could take up to two years to get to court.

Once the evidence is analyzed and the report is complete, the investigators will recommend a finding, saying if the accused is responsible or not. Instilled by the federal government, Title IX uses preponderance of evidence when recommending a finding, which asks, is it more likely than not this happened.

“That letter is meant to provide them an outlet to tell this person how what they’ve done to them affected their life. It’s one of the new social justice aspects that is being pushed across the country and we were able to get it in…” Keith added. “The hope is that, that will help in the healing, but it’ll also show the person found responsible the effect of their actions, more personal effect of their actions…”

The accused has the choice to read this private letter. This letter also never leaves Keith’s office.

After the investigators finalize a finding, both parties are notified of the finding. Keith then reviews the case as well as the Texas A&M System’s General Council before it is then given to the designated authority.

The responsibility of the designated authority is to create a punishment, also known as a sanction. These sanctions are held at the university level- either as a student or removing them from the campus. Under Title IX, Tarleton can’t legally punish someone.

There are two designated authorities on campus, Associate Vice President for Student Life Mike Leese and Assistant Vice President for Employee Services Angie Brown. The difference in their responsibilities is that Leese handles cases involving students and Brown handles cases involving university employees. Even though they handle different cases, the entire process is the same for both students and employees.

When deciding the sanction, Keith said the designated authorities look at them case by case. “Currently the prevailing idea in the Texas area is that we don’t use mandatory sanctions,” Keith said.

Sanctions are communicated to both parties unless it doesn’t directly involve the reporting party like mandated counseling.

Both parties have the choice to file an appeal on the sanction given if the Title IX process wasn’t followed, new key evidence was missing during the investigation or if the sanction isn’t appropriate.

Keith said at Tarleton only one person has ever been suspended being involved in a Title IX case and there has never been an expulsion.