During an open forum held on the campus of Tarleton State University on Tuesday afternoon, President Dr. F. Dominic Dottavio, Vice-President Tye Minckler, Athletic Director and Head Men’s Basketball Coach Lonn Reisman, and Athletics Council Chair Dr. Robert Newby addressed the possibility of a move to NCAA Division I athletics. After the information was presented as unbiased as possible, an informal poll was taken of the 28 faculty and staff members present. All 28 members in the afternoon session felt the move was in the best interest of the university.

“We have no invitation yet to join a division one conference,” Dottavio said, “and that is that first thing that has to happen. This is truly an open-ended conversation and we want to hear from the campus community. This issue is not new for us. We had an opportunity in 2003 to make a change from Division II to Division I athletics.”

“In 2003 we tried to join the Southland and we were not accepted,” Reisman said “If they call again and we say no, we will probably not get a call again for a long, long time. I think that we are a major university already, and I think we are just as good if not better than Stephen F. Austin and Sam Houston.” 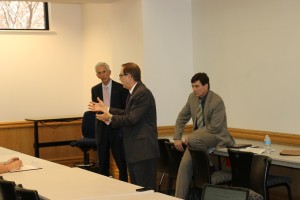 Reisman addressing the faculty and staff present at the Division I open forum. Photo by Travis M. Smith/TNS

Reisman thinks that the main reason that we haven’t been invited yet is because the Southland already has three schools on probation. However, he also thinks that in the next 12 months the phone is going to ring, and Dottavio and his cabinet are going to have a tough decision to make. Tom Burnett, the sixth Southland Conference chairman, told Reisman during a visit that the Southland Conference would love to have Tarleton State join the current 12 schools.

There is a rather large roadblock in the way before Tarleton State can make the jump in divisions. The current athletic budget is approximately $6.5 million, a number that Dottavio says is much too low.

“To be competitive in a lower level Division I conference, we will have to double that. That’s not something to take lightly, because that extra $6.5 million dollars has to come from somewhere.”

The monetary gap seems staggering at first, but Minckler says that the gap is more likely to be in the hundreds of thousands of dollars range, not millions and that it is very doable for the university. The raising of ticket prices at the gate, charging for parking on game days, as well as additional income from the NCAA could net an additional $2 million. Another $500 thousand could come from the raising of athletic fees at the Stephenville campus (note: up to a 10 percent raise in fees can be added without the need for referendum), and approximately $1.5 mil in funds could be added after adding athletic fees to the satellite campuses. The remaining $3-4 mil would hopefully come by way of the Texan Club and its members.

The Lone Star Conference has become much more stable recently, and is not as uncertain as it was when the university first began to re-entertain the move.

“At this moment in time, some of those issues that drove that initial look into Division I have subsided,” Dottavio said.

This past fall, University of Texas – Permian Basin received approval from UT- Austin to start a football program and become full members of the Lone Star Conference in 2016. The LSC has also added an Oklahoma school to its football conference, and is very interested in adding New Mexico Western and New Mexico Highlands. Dottavio said that Western could join the LSC in the next few months.

The move to Division I will also include a complete transition in how the coaching staffs recruit players to Tarleton State. For example, junior college transfers will have to have completed their associate’s degree before they can sign a Nation Letter of Intent. Reisman said that they will have to start recruiting more from the high school levels, which is not necessarily a bad thing. He said that the high school athletes will be more likely to buy into the school’s history and become more active in the alumni base after graduation because of their extended time at the university.

Dottavio did make it clear that there will be some immediate negatives of moving up in divisions. The loss of historic rivalries, like that of Tarleton State versus Midwestern State, will be the first to go. He also said that most schools who move to Division I don’t see a dramatic increase in fan attendance solely because of the move.

Casey Hogan, the Voice of the Texans and Assistant Athletic Director feels that the move is a smart one for the university.

“It’s much more difficult to get your fans ramped up to open the football season against West Texas A&M, as opposed to SFA opening up in the Georgia Dome against Georgia Tech on ESPN,” Hogan said. “We saw what happened last week, folks were coming out of the woodwork. I think we got a glimpse of the kind of opportunities we could have by going Division I.”

Hogan also said that after SFA upset VCU in an opening round game in the NCAA Division I March Madness men’s basketball tournament in 2014, that the school was overwhelmed by the number of phone calls pouring in– either making donations or ordering merchandise. Stephen F. Austin raised over $1 mil in donations after the win, and $200 thousand in merchandise that day alone.

“Sometimes you have to spend money now to make money in the long run,” Dr. Jeff Justice said, “that Final Four run probably just netted us quite a few more scholarships. It’s not a guarantee, it is a risk [moving to Division I], but it is a risk we have to take.”

Tarleton State students will have their opportunity to listen to the presentation and ask questions at a third open forum to be held on April 15 at 5 p.m.