Many enjoy traveling but for student athletes, traveling can be pretty difficult. Women’s head golf coach Jerry Doyle said that traveling long distances definitely has an effect on the team’s golf game. One athlete even said that it is one of the most difficult transitions from high school to collegiate sports. Other areas of the transition, like getting insured, are easier and make the whole experience a more pleasant one; getting appropriate insurance is easy as you can obtain collegiate athlete insurance quotes at SquarePeg.

Redshirt freshman for the Texan basketball team Shelby Drews described a recent trip the team took to Colorado in an interview. You can learn more about coach trips online.

“We got on the bus pretty early in the morning it was a 12 or 13 hour trip. Most of the time me and the other girls sleep half the way and the other half we’re usually doing schoolwork. When we get there it’s pretty much all work. We get there. We practice. We go to the hotel, we rest, we do our homework and we eat. There’s definitely a routine there’s not much time. Actually I take that back the first day we were there we did team bonding, we went bowling that was fun so we got a little break.” Drews said.

The amount of traveling can be especially overwhelming for freshmen. Drews recalled her experience with this difficulty during her freshman year.

“It was a difficult adjustment at first definitely. In high school if you miss a class, it’s not that crucial, but if you miss a college class, it feels like you’re missing a year’s worth of school,” explained Drews. 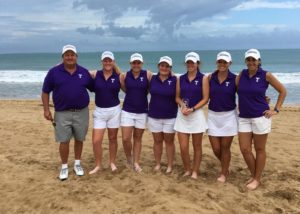 She then went on to add how even though it is intimidating at first, it was not as difficult once she got used to it.

“Once you get in a routine and once you really talk to your professors, they’re really easy to work with.” Said Drews

Just a few months ago, the golf team took a trip to Puerto Rico after accepting an invitation to the Island Getaway Invitational. Tarleton’s women’s head golf Coach, Jerry Doyle, told Texan News about their 2,000-mile journey and the effect it had on their performance.

“They could go out to the beach. They had a pool, they could go relax there. We pretty much play golf all day long so it’s good to have that relaxation time,” he added.

The trip was mostly paid by the golf team.

The Texann golf team finished the tournament in first place.

“It was a good tournament to go to and it was good for my recruiting. People see that we’re going over there to play and they might be interested in going to Tarleton.” said Doyle.

Doyle says that although travel may be difficult, especially for students, it’s not always bad considering the opportunities that come with it.

“You look at all the perks to it, and so many people would kill to be a college athlete. I wouldn’t change it, but yeah it’s definitely hard I’m not going to lie,” Drews said.