TREAT expands program to include veterans

Tarleton Equine Assisted Therapy (TREAT) continues to shine with the addition of a veteran’s riding program. 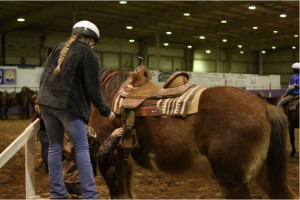 The veteran program for TREAT is solely made up of volunteers.
Photo by Cameron Cook

While the TREAT program began the veterans program in June 2014, the fall also brought the expansion of TREAT rides from twice a week to four times a week. The fourth Friday of each month is designated for the veterans.

Hailing from Granbury, the group known as the Wet Veterans was founded November 2013 by Pat and Mike Stewart. Pat, a swimming instructor at the YMCA, began helping vets in the faith- and family-based organization, hence the groups’ name. It has since introduced the group to the TREAT program.

While all of the riders are veterans, they do not necessarily have military sustained-disabilities. Though TREAT focuses on numerous disabilities, ranging from ADHD to more severe incapacities, the new program emphasizes making life easier and more enjoyable for veterans and their families.

“The veterans program is extremely flexible with the riders,” said instructor Dr. David Snyder. “Most ride as long as they can, due to age disabilities, but we do have a few that are independent riders that can ride on their own in the arena.”

Since most of these riders are older, they can only stay on a horse for short periods of time.

“They can get on and off as many times as they want; this is a free program geared towards them,” Snyder added.

While most months range from 10 to 15 riders, there have only been a few instances where Stephenville veterans have attended. As awareness for the program continues to grow, local vets are encouraged to bring their families and attend these monthly rides.

Since the program is hoping to increase from rides once a month to once a week, volunteers are encouraged to come and help assist these rides.

“The TREAT helpers are students in the Equine Assisted Therapy class, an upper-level elective to all students, but the helpers for the veterans program are on a completely volunteer basis,” said Snyder. 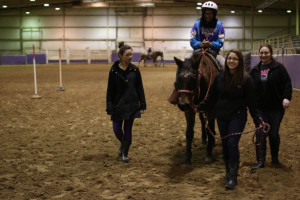 Along with the vet program, TREAT has also been recently recognized on a international level.

“Horse chiropractor Larry Smith works (for free) on our therapy horses and brought an eight man crew with three cameras to film him working on the horses, interview TREAT instructors and film some riders,” said Snyder.

Smith will be entering the film in the nationwide contest by Ford and the Professional Bull Riders Association (PBR) known as “Ford Good Works.” This is a yearlong contest for citizens to submit films performing good works with their Ford trucks that will be shown as a commercial during televised PBR events.

While the program strives to pave the way for numerous riding opportunities, the veterans program will continue to grow and would eventually like to help veterans on more than one level.

“Right now we are clueless as to how to deal with Post Traumatic Stress Disorder,” Snyder explained, “but we are hoping to expand our instructor’s knowledge of how to better deal with psychiatric needs.”

For more information regarding TREAT programs and dates, visit the website at tarleton.edu/treat.