CAIRO — The trial of Egypt’s ousted President Mohammed Morsi will begin on Nov. 4, authorities announced Wednesday, launching a politically charged prosecution of the country’s first democratically elected leader on charges he incited the killing of opponents while in office — and taking the crackdown against the Islamist leader and his Muslim Brotherhood to a new level.

The trial threatens to add to the turmoil gripping Egypt since the July 3 popularly supported coup that removed Morsi, as his Islamist supporters are likely to hold protests around his court appearances that could easily spiral into violence. Over past months, Brotherhood-led protests against the military have repeatedly turned to clashes with police that have left hundreds dead. 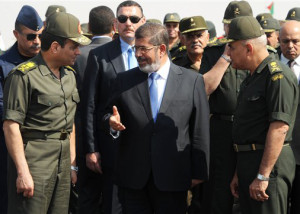 In this Wednesday, Oct. 10, 2012 file photo released by the Egyptian Presidency, then Egyptian President Mohammed Morsi, center, speaks with Minister of Defense, Lt. Gen. Abdel-Fattah el-Sissi, left, at a military base in Ismailia, Egypt. An Egyptian court has set Nov. 4, 2013, as the start date for the trial of ousted President Mohammed Morsi on charges of incitement to murder for the killings of opponents who were rallying outside his palace while he was in office. Morsi, ousted in a popularly-backed military coup in July, has been held incommunicado since.
(Photo Courtesy of the Associated Press and Egyptian Presidency)

For the military-backed government, the trial is an opportunity to show justification for the broad crackdown it has waged against the Brotherhood — and ultimately for the removal of Morsi — by bringing out details of one of the tensest periods of Morsi’s presidency, when the president was clashing openly with the judiciary and coming under accusations of using Islamist mobs to suppress dissent.

But the military, , which now dominates the country’s politics, also opens itself up to potential criticism it is merely carrying out show trials, trying to put a nail in the coffin of the Brotherhood, which accuses the army and its supporters of wrecking Egypt’s fledgling democracy.

Already there are questions whether the trial, in which Morsi and 14 other members of his Brotherhood are defendants, can be fair. Morsi has been held in secret military detention since his ouster, with almost no contact with the outside world beyond two phone calls with his family. His defense lawyers have not been allowed to talk to him yet, and they say they have not been shown the documentation of the prosecution’s case against him.

The trial is likely to be the first of many against the Brotherhood. Prosecutors have been preparing cases against some 2,000 of the group’s leaders and members currently in detention.

“This is a trial held under the cannon of a tank,” said Mohammed Gharib, a member of Morsi’s legal team, saying the procedures are just an extension of the political crackdown. “Is this an atmosphere for a fair trial?”

Human rights lawyer Hoda Nasrallah said that the case, taken at face value, has potentially firm merits and is not simply political.

“But there are definitely political purposes … and score settling,” she said. Rights lawyers underlined that they had tried to press this case even before Morsi’s fall.

The case also is a new landmark in Egypt’s political convulsions over the past 2 ½ years. With Morsi going to court, Egypt will have two ex-presidents on trial at the same time. Longtime autocrat Hosni Mubarak, toppled in 2011, is undergoing a retrial on charges he was complicit in the killings of protesters against his rule.

The case against Morsi is based on one of the deadliest bouts of violence during his year in office. On Dec. 4, at least 100,000 people protested outside his presidential palace against a decree Morsi issued giving himself sweeping protections from judiciary oversight. The move allowed his allies to push a highly disputed draft constitution on the way toward adoption without court challenge.

On Dec. 5, a group of Islamist supporters of Morsi descended on a sit-in camp set up by the protesters outside the palace, beating them and tearing down tents. It sparked street battles that killed at least 10, and saw Brotherhood members abducting and beating protesters in a makeshift sidewalk detention facility.

The prosecution accuses Morsi and his co-defendants of inciting his supporters and aides to murder his opponents by forcefully breaking up the sit-in.

One key question remains undecided: where the trial will be held. A venue that is too public would be more vulnerable to protests by Morsi supporters, but a trial held fully behind closed doors will bring questions whether the proceedings are fair.

Security officials told The Associated Press that he may be tried in the same location as Mubarak, at a courtroom set up in a police academy in eastern Cairo, seen as easier to secure and provide room for the large number of lawyers and journalists.

Another option being considered, the officials said, is to set up a court in the Tora prison complex in south Cairo where most of the Brotherhood leaders — though not Morsi, at the moment — are being held. The officials spoke on condition of anonymity because they were not authorized to talk to the press.

The military ousted Morsi after demonstrations by millions demanding he leave office. After riding to political dominance on a series of election victories, Morsi and the Brotherhood had come under a massive backlash from a public that accused them of trying to monopolize power.

Since the ouster, a court ordered the Brotherhood banned and its assets confiscated, while officials and media have depicted Morsi’s supporters are a violent movement threatening the nation’s security. Meanwhile, public anger against the group’s conduct while in office is deepened by a surge in violence by Islamic militants, many of whom backed Morsi while in office and who now have been escalating attacks on police, the military and — most recently — on civilian infrastructure.

The most prominent of the 14 Brotherhood figures being tried alongside Morsi are Mohammed el-Baltagy and Essam el-Erian, who is in hiding and will be tried in absentia. Seven others are still at large.

Lawyer Mostafa Atteyah said a meeting of Morsi’s defense team Wednesday, was to decide on the course of action and name the head of the team. He said so far the legal team has not seen the case’s documents.

Some details of the prosecution’s case have been leaked. The state news agency said investigators found that Morsi had asked the Republican Guard and the minister in charge of police to break up the sit-in outside the palace but they refused, fearing a bloody confrontation. Morsi’s aides then summoned their supporters to forcefully break up the sit-in, according to the agency report.

He said those arrested — most of whom had in fact been seized by Brotherhood members — confessed to being thugs paid to cause chaos. But a prosecutor at the time released the detainees, saying they had made no such confessions and that he had been pressured by his Morsi-appointed boss to implicate them. The prosecutor was later removed from his post and sent to a provincial office, a move he successfully appealed saying he was being punished.