The “American Sniper” murder trial thrust Erath County and Stephenville into the glare of spotlights and in front of camera lenses as regional, national and international media converged on the area to report one of the biggest stories of the year.

When they arrived before the trial began on Feb. 11, many reporters wrote or filmed “advance stories” depicting what Erath County and Stephenville were like. They also asked whether defendant Eddie Ray Routh, a former Marine accused of the murders of military sniper Chris Kyle and his friend Chad Littlefield, could receive a fair trial. 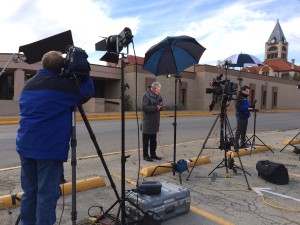 How the media portrayed the city and county varied from accurate and sensitive on one hand to overstatement and stereotypes on the other. The more distant the media was from Stephenville, the more stereotypical the reporting appeared to be.

“We would prefer to have national attention for a different reason, but we feel like those who have the opportunity to visit here see our friendly hospitality,” July Danley, president of the Chamber of Commerce, told The Dallas Morning News.

Danley said she likes to see visitors “get away from the big city and enjoy a little different pace of life.”

When members of the media got away from their big cities like New York, Washington, D.C., Los Angeles and London arrived in Stephenville, one of the images that drew their attention was Moo-La, the plastic cow on the Erath County Courthouse square that commemorates the county’s status as a top dairy center. Moo-La was mentioned in news stories and photographed more than anything except for the historic courthouse, an informal survey of media stories by Texan News Service found.

Many stories also mentioned that Stephenville bills itself as the “Cowboy Capital of World” and emphasized its smallness, which seemed to imply Stephenville was not prepared to handle a large trial.

A story in The New York Times titled  “American Sniper’ Trial Sets Town on Edge “ included interviews with Chick Elms of the Grant Entry Western Store, which is selling Chris Kyle caps, and Carol Gibson, owner of the Rockin’ P Bar and Grill across the courthouse. The story quoted her as saying, “We’ve never had anything like this in this town.”

Yahoo News’ piece, “’American Sniper’ Trial Puts Rural Texas Town in Unwanted Spotlight,” also included an interview with Elms, who was described as a “modest man with a thick Texas drawl.” He was quoted as saying the trial was putting Stephenville on the map.

“But you don’t want to be known for stuff like this,” he added.

The author of the piece, Jason Sickles, spoke to a Tarleton news-gathering and writing class the day his piece ran and explained how national reporters typically size up a locale for a big event such as a high-profile trial.

Sickles, who lives in the Dallas-Fort Worth area, said he drove around town to get “the lay of the land,” then headed downtown to look for people to interview. He found some at the businesses around the square and even went up to people sitting in pickup trucks and asked them questions.

“I wanted to get the voices of regular people in the story,” Sickles explained.

Many media organizations tried to do that, too, and headed to Jake & Dorothy’s Café a few blocks from the courthouse to interview local residents. The Dallas Morning News ran a piece called “Stephenville Braces for Trial in Killing of ‘American Sniper’ Chris Kyle” and included a comment from a café customer who said he was interested in who is picked on the jury because “everyone has heard about this case.” 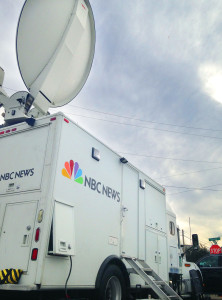 Well, probably not everyone.

WFAA-TV Channel 8 reporter Jim Douglas filed a balanced advance story that mentioned the cowboy capital title, the dairy industry and the high school football team. He also described Stephenville as “generous” and spoke of how the town rallies around people who need help.

The most stereotypical piece was “’Cowboy Capital of the World’ Readies for Start of Chris Kyle Trial” in The Guardian, a British publication with a U.S. edition. The article was illustrated with a photo of a man wearing a T-shirt that read “Texas Born” with a gun and skull on it.

The piece also used kitschy terms to describe Stephenville, such as this: “On the other side of the square is the Cowboy Capital Walk of Fame, a sort of booted, lasso-twirling riposte to Hollywood Boulevard.”

However, the end the article struck a serious note. It quoted Julie Merriman, director of counseling programs at Tarleton, who said she hoped the trial would provoke a thoughtful discussion about veterans’ mental health.

Other reporters focused on guns. A story by the news service Reuters depicted Erath County as a “place where hunting, guns and military service are the norm for the mostly rural county of sprawling ranches.”

ABC News, in a story about jury screening, made the statement that Stephenville was “as far from Hollywood as possible.” The video included an image of a toothless man.

Photographs and video also were used to capture the town’s flavor. Photos of the marquee in front of Grump’s Burgers that reads “We Support the Kyle and Littlefield Families” ran in several publications.

Paul Moseley, a photographer with the Fort Worth Star-Telegram, took a series of pictures that included an American flag on the square, Moo-La and two men discussing the trial over coffee at Jake & Dorothy’s Café. They had teeth.

While national media organizations did their share of stereotyping, the Los Angeles Times described Stephenville as a “rural ranch community” and a “college town.” It was one of the few articles that mentioned Tarleton, the single largest employer in town and one of the state’s fastest growing centers of learning.