Troub’s Take: ‘After Earth’ an exhilarating joyride of epic proportions

Summer is officially upon us ladies and gents, and that can only mean one thing. It is blockbuster season once again! Starting off this season strong is “After Earth,” a sci-fi action drama starring Will and Jaden Smith.

Set a thousand years into the future, “After Earth” has been used and abused to the point of inhabitability. 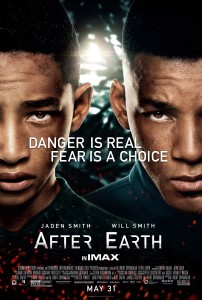 “After Earth” pits Jaden’s character Kitai Raige against a world of nature run rampant after the ship he and his father Cypher, played by Will Smith, are riding on is forced to crash land on Earth, a now quarantined planet, where every living thing on the planet has evolved to kill humans.

Kitai must travel over 100 kilometers through every type of terrain imaginable, dodging predators of the land, sea and air to retrieve an emergency distress beacon all-alone.

His father Cypher, the first Ranger to conquer fear and go “Ghost” to avoid being detected by human-eating Ursas – a completely blind alien race who hunt by detecting the trace pheromones the human body secretes while experiencing fear – is stranded in the cockpit of the ship, immobilized by debilitating injuries and slowly dying from his wounds.

Cypher guides Kitai through every obstacle, every danger through the communications systems in Kitai’s suit. Will Smith uses every second of his screen-time to deliver a powerful performance, worthy of some Best Actor nominations.

From the teepee-like skyscrapers of the new Earth, known as Nova Prime, to the jungles and waterfalls and caves of Earth, audiences will be stunned and immediately enveloped in one of the most artistic and epically visualized films of all time.

Matching the broad scope of beautiful scenery and high-intensity action is the score for “After Earth.” James Newton Howard sets the tone for every scene, quite literally in fact.

From the birds cawing in the distance to the growl of predatory monkeys, to the beeps and tweets and hums of the far-advanced technology around the Raiges, “After Earth” might actually sound better than it looks.

The 100-minute film, as most science fiction flicks tend to do, warns of the harms of humanity’s excess and destruction of their environment, but also goes to a much deeper portrayal of humanity itself.

The tagline for the film, “Danger is real. Fear is a choice” is a central theme throughout the action of the film.

The scene where Cypher explains to his son how he first went “Ghost” is gripping, chilling and powerful. References to Moby Dick highlight a necessity to learn from our past, and to preserve the world’s natural beauty around us, while Jaden’s trials encourage audiences to persevere against all odds, when all hope seems futile and frail.

Moviegoers of all ages will find the father-son dynamic memorable and enthralling. The visuals of the familiar, yet now alien world of Earth will entice, and envelope, and the score will subtly swoon the audience into a sci-fi fanatic’s dream-come-true.